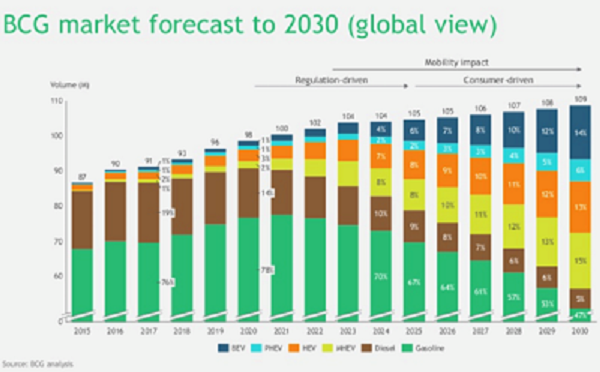 A combination of hybrid and fully electric powertrains is predicted to halve the global market share of pure internal combustion engines (ICEs) by 2030. New research by The Boston Consulting Group suggests that ICEs will continue to play a major but changing role in the industry, as most electrified vehicles (EVs) over time will be hybrids.

Technology, regulatory mandates, and consumer cost of ownership are the drivers of the transition forecast to occur in three phases in the near-term.

The third phase will be marked by rapidly increasing sales of all electrified vehicles, especially BEV. The per-kilowatt-hour cost of batteries is predicted to fall to between $80 and $105 by 2025 and to between $70 and $90 by 2030. This trend will be accompanied by increasing consumer demand based on TCO. The adoption of EVs for shared mobility vehicles will accelerate because their higher mileage will result in more rapid payback of the investment.

ICEs will continue to be the powertrains of choice for most European consumers through 2025. Market development in Europe will be fairly evenly divided among electrified vehicle types, with BEVs taking a 17 percent share by 2030 and hybrids a collective 33 percent share.

A similar trend for the U.S. will be driven by the low cost of gasoline. Most of the EV growth will occur in smaller vehicle segments: by 2030, vehicles in the C segment will be almost entirely electrically powered, while ICEs will remain the primary powertrain for pick-ups. Hybrids will dominate the Japanese market, with a collective share of 55 percent by 2030.

By posting a comment you confirm that you have read and accept our Posting Rules and Terms of Use.
Advertisement
RELATED ARTICLES
Where does the internal combustion engine go from here?
Mazda plans a rotary engine-powered hybrid
Ford to Expand China Presence with EV Production
Video: Report tracks decline in vehicle fuel economy, uptick in emissions
Ford Signs MOU to Develop EVs with China Partner
Advertisement