Optical Device May Lead to Cleaner Air and Skies

A new optical device at Sandia National Laboratories that helps image pollutants in combusting fuel sprays might lead to clearer skies in the future.

An optical set up developed by researchers at Sandia’s Combustion Research Facility and the Technical University of Denmark can quantify the formation of soot—particulate matter consisting primarily of carbon—as a function of time and space for a variety of combustion processes. Initially, the researchers have focused on the combustion of liquid fuel sprays found in engines, where the extreme pressures and temperatures create an environment that is optically challenging. 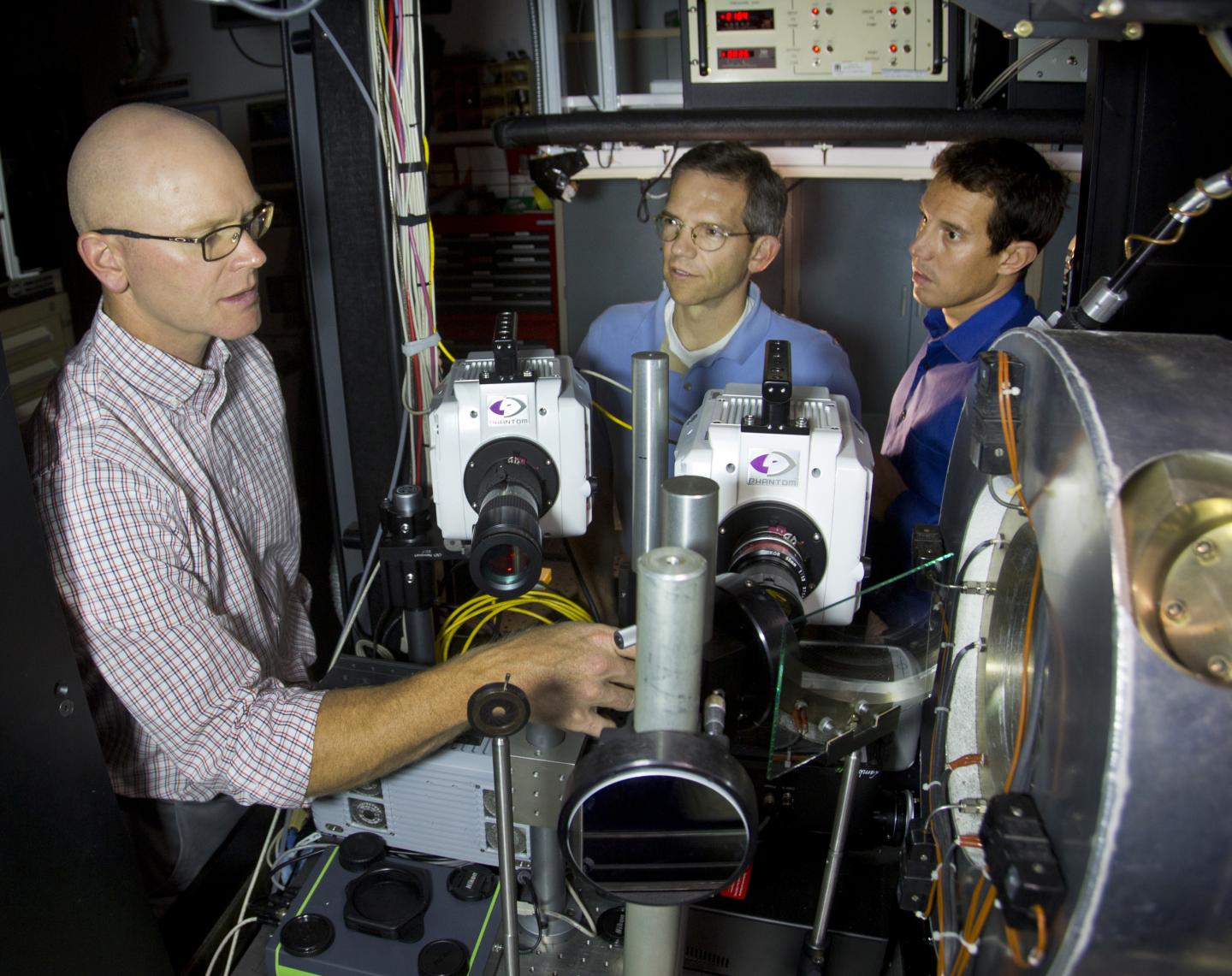 "The acquired data provides important insights into the fuel spray motion as well as the timing and quantity of soot formed under a wide range of conditions," said Sandia researcher Scott Skeen. "Engine developers can use this information to validate computer models and design advanced engine combustion strategies that will improve fuel economy for consumers while also lowering tailpipe pollutant emissions."

The authors of the paper on this research included Fredrik Westlye and Anders Ivarsson from the Technical University of Denmark and Sandia researchers Keith Penny, Lyle Pickett, Skeen, former Sandia researcher Julien Manin.

Imaging flames at temperatures and pressures found in engines can be difficult because of “beam steering.” Beam steering occurs when light passes through a medium with varying refractive indexes commonly observed as a “mirage” on the highway in the summertime. Hot pavement heats up nearby air, causing its refractive index to change. The sunlight changes direction as it passes from cooler air through the hotter air, and these steered light rays give the impression that there is water on the road, aka a mirage.

The special lighting was enabled by a custom engineered diffuser that is large enough to fill the area of Sandia’s spray combustion chamber window (4 inches or 100 millimeters). The engineered diffuser was specifically designed to emit light rays with the same brightness over a specified angular range. In this way, a light ray that gets steered as it passes through the flame will be replaced by another ray with the same intensity.

The angle of the engineered diffuser is optimized based on the physical dimensions of the experimental facility, the magnitude of the anticipated beam steering and the collection angle of the imaging system.

"In fact," Manin said, "without such a specific optical arrangement, quantifying soot via light attenuation in high-pressure spray flames, where beam steering is more severe, would not be possible."

Although the new diesel vehicles are cleaner than ever before, some of the latest generation gasoline engines emit as much particulate matter as older diesel engines. The increased particulate matter can be attributed to the adoption of a gasoline direct-injection fuel system, which results in improved fuel economy and therefore lower carbon dioxide emission per mile driven.

Gasoline direct injection involves spraying high-pressure liquid gasoline directly onto the engine cylinder rather than mixing and vaporizing the fuel in the intake port outside the cylinder. This method reduces heat loss and allows for freer airflow. But consumer savings at the pump come at the cost of higher particulate matter emissions. Unlike the black smoke emitted from older diesel engines, soot emitted from gasoline direct injection engines is invisible to the naked eye because of the particles’ small size.

The diagnostic presented allows researchers to quantify the formation of particulate matter in combusting sprays with unprecedented temporal and spatial resolution. Insights gained and data acquired from the use of this diagnostic will inform and guide researchers and automotive manufacturers toward a design that maximizes fuel efficiency when minimizing harmful tailpipe emissions.

The work is a contribution to the Engine Combustion Network that was established in 2010 by Picket. The network promotes collaboration among engine researchers around the world. Although participation is voluntary, the network provides no financial support, more than 15 institutions have contributed experimental data.

"The network represents the power of a grass-roots movement," said Pickett. "We have accomplished 20 years' worth of research in one-fifth of the time."

One challenge of the collaborative effort within the network is the standardization of experimental diagnostics. "With so many researchers eager to participate, it is important to ensure that everyone contributes high-quality data acquired in a technically sound manner," said Pickett.

The optical technique developed in this work relies on light attenuation or extinction to quantify the amount of soot in a flame. When light enters the combustion vessel, it will be absorbed or scattered by soot particles. The light that is absorbed and some light that is scattered will not reach the camera sensor. The reduction in measured light intensity can be related to the amount of soot present.

To make the implementation of this diagnostic tool convenient for network participants, the associated publication provides detailed guidance on the necessary equipment and instruction for sizing the illumination source and collection optics. The use of Sandia-developed LED light source, as opposed to a high-speed laser, means the cost and complexity are significantly lower.

"This work aims to establish a standardized experimental method of extinction imaging that will increase the reliability and reproducibility of experimental measurements submitted to the network," Westlye said.

A paper on this research was published in Applied Optics.

By posting a comment you confirm that you have read and accept our Posting Rules and Terms of Use.
Advertisement
RELATED ARTICLES
This innovation could cut soot emissions from diesel engines
Revealing the Roots of Soot Formation
Tiki Torch Soot Serves as Surrogate for Diesel Engine Soot
Record Circumnavigation Attempt Could Inform Better Boat, Fuel Designs
Ford to Pursue Single-Digit-Emission Diesel Vehicle
Advertisement