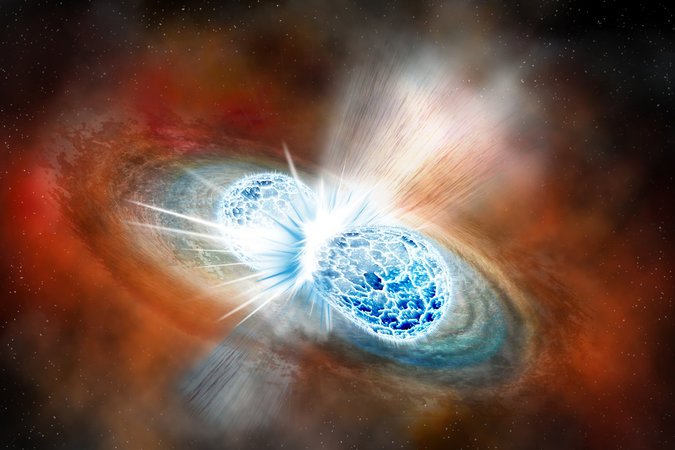 An artist’s rendering of the merging of two neutron stars on Aug. 17, 2017. Source: Robin Dienel/The Carnegie Institution for Science

Today, at a conference in Washington, D.C., sponsored by the National Science Foundation (NSF), a group of astronomers working in the Laser Interferometer Gravitational-Wave Observatory (LIGO) and Virgo projects announced that on Aug. 17 they detected gravitational waves produced by the enormous collision of two neutron stars, for the first time ever. Previous detections of gravitational waves resulted from black holes.

For the LIGO and Virgo researchers, this is a more significant occurrence than the original discovery of gravitational waves in 2015. This is the first time astronomers have been able to observe this phenomenon. All of LIGO’s previous discoveries have involved colliding black holes, which only produce waves that can be detected by the interferometers of LIGO and Virgo. With black holes, there is nothing for the eye or the telescope to see, as in this case of colliding neutron stars.

Today, astronomers in many cities around the world are busy conducting press conferences and polishing the last paragraphs of papers to be published. One notable paper to be published in the astronomical journal Letters on Oct. 20 has a staggering 4,500 astronomers as authors from 910 world institutions.

“That paper almost killed the paper writing team,” said Vicky Kalogera, a Northwestern University astrophysicist and one of the paper's 10 actual writers. (Read the abstract.)

Per Wikipedia: “A neutron star is so dense that one teaspoon (5 milliliters) of its material would have a mass over 5.512 kilograms (that is 1,100 tonnes per 1 nanolitre), about 900 times the mass of the Great Pyramid of Giza.” Because of their densities, when neutron stars collide all types of energies and materials burst out: x-rays, gamma rays, radio waves and chemical elements, among other things.

Collisions like this one — and billions of others throughout the history of the universe — are called cosmic forges by some because the explosions produce many of the heavy elements in the universe and, most likely, all the precious metals such as gold, silver, platinum and uranium. 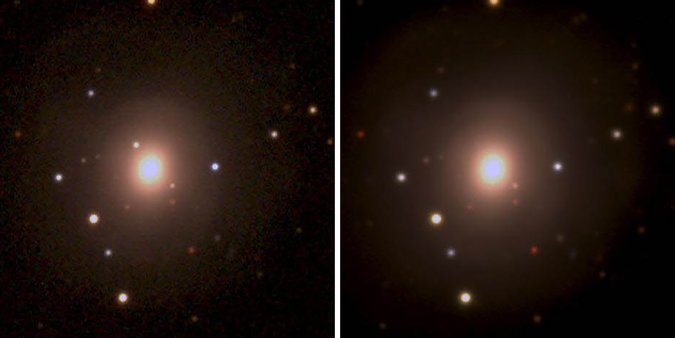 Images captured by the Dark Energy Camera at the Cerro Tololo Inter-American Observatory in Chile showed the fiery aftermath of the explosion from the colliding neutron stars. On the left, a tiny dot is visible just above the bright spot in the center of the frame — that dot is the explosion. At right, the same view without the explosion. Source: National Optical Astronomy Observatory“It’s the greatest fireworks show in the universe,” said David Reitze of the California Institute of Technology and executive director of LIGO.

“I can’t think of a similar situation in the field of science, in my lifetime, where a single event provides so many staggering insights about our universe,” adds Daniel Holz, an astrophysicist at the University of Chicago and a member of the LIGO Scientific Collaboration

“Joy for all,” said David Shoemaker, a physicist at the Massachusetts Institute of Technology who is the spokesman for the LIGO Scientific Collaboration.

The events of the discovery started on the early morning of Aug. 17 when Dr. Shoemaker found that an alarm went off because one of the LIGO antennas in Hanford, Washington, recorded an unusual signal. After several more alarms from detecting instruments around the world and telescope pictures from the Hubble telescope and observatories in Chile, it was clear that this extraordinary event happened and was detected by humans.

“When we saw that,” Dr. Shoemaker said, “the adrenaline hit.” Dr. Kalogera, who was in Utah hiking when she got the alarm, recalled thinking: “Oh my God, this is it. This 50-year-old mystery, the holy grail, is solved.”

“These are the first optical photons from a kilonova humankind has ever collected,” Dr. Foley said.

By posting a comment you confirm that you have read and accept our Posting Rules and Terms of Use.
Advertisement
RELATED ARTICLES
Three American Scientists Earn 2017 Nobel Prize for Physics
The Mapping of Black Hole Collisions Gives Astronomers a New View
7 Materials that Only Exist or are Made in Space
Why Are Certain Metals Rare or Precious?
The Precision (and Promise) of the James Webb Space Telescope
Advertisement