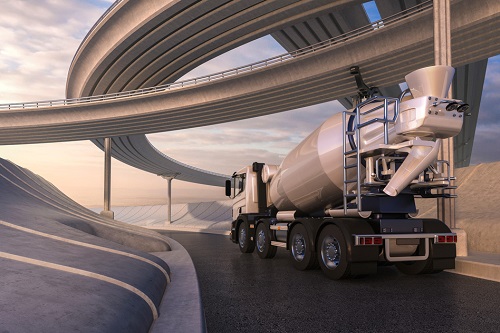 Cement’s microscopic properties are key to stronger, more sustainable buildings. Source: MITCement—including cement paste, mortar and concrete—is one of the most widely used materials in the world. However, it also leaves a mighty carbon footprint to the tune of nearly 6% of global carbon emissions.

Because demand for cement is unlikely to fall in the coming years, MIT researchers have developed a new approach to producing stronger and more sustainable concrete using local materials as additives to offset its greenhouse gas emissions.

Researchers studied individual concrete atoms that contribute to the material’s overall strength and durability. MIT developed a computer model to simulate the behavior of individual atoms that arrange to form molecular building blocks within a hardening material.

The simulations reveal that an interface within the molecular structure exhibited a “frictional” resistance under sliding deformation. MIT then developed a cohesive-frictional force field to incorporate these atom-to-atom interactions in larger-scale particles each containing thousands of atoms.

The team is now looking into ways in which the cohesive and frictional forces or groups of atoms—or colloids—in cement are improved by mixing in certain additives such as volcanic ash, refinery slag and other materials. The model could help designers choose local additives based on molecular interactions of the resulting mixtures.

“The conditions of the world are changing,” says Oral Buyukozturk, a professor of civil and environmental engineering at MIT. “There are increased environmental demands, including from earthquakes and floods, and stresses on infrastructure. We need to come up with materials that are sustainable, with much longer design life and better durability. That is a big challenge.”

Researchers developed the computer model as part of a computational framework to analyze how the atomic structure of concrete affects engineering properties. These models simulate the sliding and movement of clusters of particles at molecular scales within concrete.

“The material science of cement strength is still in its infancy regarding molecular-level descriptions and an ability to perform quantitative predictions,” says Sidney Yip, professor emeritus in MIT’s Department of Nuclear Engineering. “The issue of frictional force, addressed in our work, pertains to the mechanical behavior of cement that varies over time. This rate sensitivity is an aspect of the scientific challenges at the mesoscale, which is the research frontier where microscale concepts and models developed in several physical science disciplines are linked to macroscale properties for technological applications.”

The next steps are to incorporate various additives into their model, to investigate the effect of such materials on the atom-to-atom behavior of cement and the resulting strength of the final, solidified concrete.

Future steps will look into how additives influence the chemical composition of these colloidal phases, which could be used as part of a database to design and optimize new concrete materials with improved strength and deformation behavior.

“We know relatively little of what happens when additives are used in concrete,” says Steven Palkovic, a graduate student involved in the study. “We would not expect volcanic ash from Saudi Arabia to give the same performance as volcanic ash from Hawaii. So we need this greater understanding of the material that starts at the atomistic scale and accounts for the chemistry of the material. That can give us greater control and understanding of how we can use additives to create a better material.”

The full research can be found in the Journal of the Mechanics and Physics of Solids.

How about developing a sand substitute.

The world is running out of sand | World Economic Forum

Or you could use fly-ash from coal burning power plants rather than risk the wrath of Pelé.

Re: Building Stronger Concrete with Sustainable Materials to Reduce Greenhouse Gas Emissions
#3
In reply to #2
lyn

"Typically, fly ash is added to structural concrete at 15-35 percent by weight of the cement, but up to 70 percent is added for mass concrete used in dams, roller-compacted concrete pavements, and parking areas.