Veterans Use Virtual Reality to Help Them Land Jobs 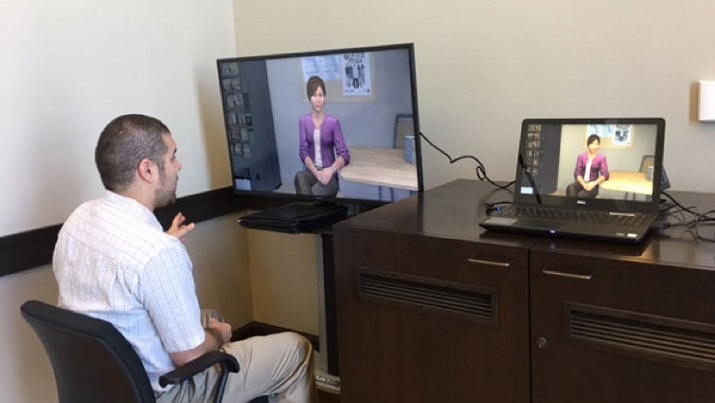 The Virtual Training Agent for Veterans, or VITA4VETS, was developed in partnership with the U.S. Army Research Laboratory (ARL) and is designed to build job interviewing competence and confidence, while reducing anxiety. The system was originally intended to help those with autism, but researchers and developers soon realized its potential to help veterans—who sometimes struggle with the transition from military service to civilian workplace life.

Juan Gutierrez, a 33-year-old Navy veteran with experience in aviation electronics, said working with the system gave him more confidence. “Answering questions with a virtual human rather than a real human helped me feel less nervous…I could practice different responses and there were no repercussions with the avatar," he said. "I learned I could ask questions too. Instead of feeling nervous, like I am being tested, it was a way for me to be honest and learn if (the job) is something I'd like to do. Overall, VITA helped me feel confident with my interview."

In 2016, the Bureau of Labor Statistics reported that veterans accounted for about nine percent of the civilian, non-institutional population ages 18 and over—a total of 20.9 million. Of those, more than 450,000 were unemployed.

"Although many veterans have the necessary talent and temperament for vocational achievement, they may find it challenging to express the ways in which their skills and experience are able to translate to the private sector," said Matthew Trimmer, project director for VITA4VETS at the University of Southern California's Institute for Creative Technologies (USC ICT). The institute served as one of the partners in development of the system, along with the ARL, the charitable arm of Google (Google.org) and the Dan Marino Foundation (DMF).

VITA4VETS is currently available through the United States Veterans Initiative (U.S. VETS) in Los Angeles. It uses six virtual human characters that span different genders, ages and ethnic backgrounds. Each character can model three behavioral dispositions or interview styles, and can be placed in a variety of interchangeable background job contexts.

Trimmer said the approach allows for customizable training geared to the needs of the user, and has been known to produce positive results. According to U.S. VETS, 93 percent of veterans have obtained employment using the application.

By posting a comment you confirm that you have read and accept our Posting Rules and Terms of Use.
Advertisement
RELATED ARTICLES
Job searches during a pandemic: What engineers should know
Researchers Discover Key to Being More Likeable on Dates, Job Interviews
Researchers using AI and voice analysis to diagnose PTSD
Startup prepares to launch scented VR
Overcoming Interview Jitters
Advertisement