The Future of Automotive Fuel: Seaweed 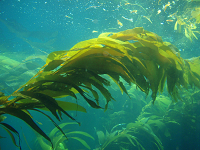 PNNL researchers are developing two different technologies that could one day enable cars and trucks to run on biofuel made from seaweed grown in the open ocean, including the kelp shown here. Source: NOAA

Gasoline, diesel, ethanol, batteries, compressed natural gas and hydrogen should all be recognizable as automotive fuels. Here’s one you may not have considered: seaweed.

According to the U.S. Department of Energy, the U.S. could produce enough macroalgae to meet about 10 percent of the nation's annual energy needs for transportation. But first, technologies are needed to maximize production of this potential biofuel crop.

An autonomous cultivation system that runs along a 5-kilometer carbon-fiber rope is under development as a low-cost cultivation method. The longline system will be kept afloat by free-floating buoys equipped with sensors that track the farm's position, speed of movement and underwater light exposure. Data from the sensors will automatically calculate growth of two species of kelp growing along the line. The line's carbon fiber used in the Nautical Offshore Autonomous Device, or NOMAD, will be made with composite waste materials from the aviation industry.

Knowing where to grow seaweed is as crucial as knowing how to grow it. The researchers plan to develop a set of advanced modeling tools that can predict the best locations and times to efficiently cultivate seaweed in an open-ocean farm. Several existing modeling tools will be tapped to evaluate seaweed growth potential, nutrient availability, and how natural phenomena such as wind, currents, tides, waves and storm surges could affect the productivity of manmade seaweed farms.

Re: The Future of Automotive Fuel: Seaweed
#1

CO2-consumption: 8-10 tons per ha per year {lined copied from this Norwegian power point on seaweed culture.}

I noticed also the dry basis comparison with algal culture is similar tonnage. I assume that algae could be optimized for oil content, whilst seaweed (kelp in particular) could produce sufficient carbohydrate for ethanol production - bio-diesel should be easy, other fuels including gasoline, not all that difficult.