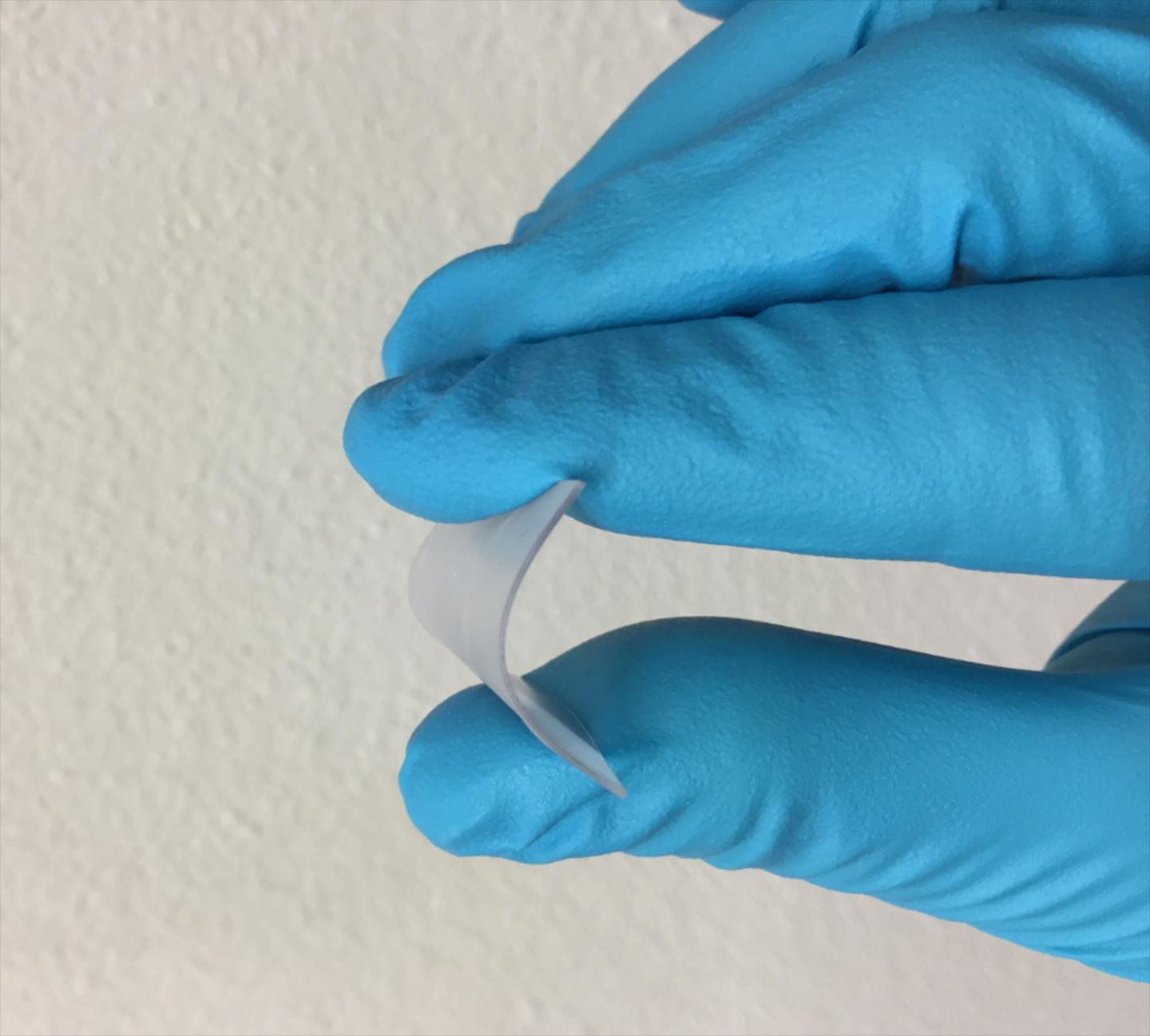 Here's what the anti-icing coating looks like when it is attached to a flexible piece of plastic. The coating itself is just 30 microns thick, or about the half the width of an average human hair. Source: NTNU Nanomechanical Lab

Scientists and engineers have been trying for a long time to find a solution to the build up of ice on structures. Ice can be detrimental to many technologies and buildings. For example, a thin layer of ice on a solar panel can cause a lot of damage to their ability to generate electricity. Thin layers of ice on the vanes of wind turbines can slow their efficiency. A layer of ice on an electrical transmission line can be just the first step to dangerous ice buildup.

A research team at the Norwegian University of Science and Technology (NTNU) is working with a new approach to prevent ice buildup by cracking it.

"We think we have found a very interesting method to reduce ice adhesion which is unique and a breakthrough in the anti-icing community," says Zhiliang Zhang, a professor in the Department of Structural Engineering at NTNU and head of the SLICE research project team that discovered the technique.

One of the ways to prevent ice from building up on a surface is used on airplanes. In the winter, airplanes can develop ice buildup, which is very dangerous. The way that airlines keep ice from sticking to the plane involves spraying de-icing fluid on a plane’s wings and other major parts of the aircraft.

The spray physically removes any accumulated ice and makes the surface on the plane less likely to accumulate snow or ice for a brief period.

In most industrial applications, such as an offshore rig or ship in the Arctic or on wind turbines in places with cold winters, spraying antifreeze on a structure that needs to be protected from ice build-up is not an option.

Scientists and engineers then created superhydrophobic coatings that excel at repelling water. Since water is needed to make ice, this approach should prevent ice formation.

Superhydrophobic substances can be sprayed onto surfaces or objects can be dipped into the substance. They are usually made of fluorinated chemicals that are not very environmentally friendly. Scientists are not completely certain that a superhydrophobic surface is one that can remain ice-free for long periods of time. That moved Zhang and his team at the NTNU Nanomechanical Lab to try a different approach.

"Our strategy is to live with ice," he said, by letting it form but by ensuring that the layers of ice crack away from the surface and fall off.

In their search for ways to keep ice from sticking to surfaces, ice researchers have tried manipulating physical forces to generate interface cracks at the nanoscale, which is at the atomic scale and the micro scale.

In the past, ice researchers have tried creating slippery surfaces that rely on surface chemistry to cause cracks by weakening atomic bonds between the ice and surface. These surface-chemistry-related substances have been called NACI, for nano-crack initiators.

At the microscale, researchers built micro-bumps into the surface they want to protect from harmful ice. These micro-bumps are called micro-crack initiators, or MICI because their roughness promotes microcracks at the contact between the surface and the ice. It limits the ability of the ice to stick to the treated surface.

Both of these mechanisms together aren’t perfect at preventing ice from sticking. Zhang and his colleagues tested a number of commercial and homemade coatings that rely on NACI and MICI to lower the ability of ice to stick to the surface.

The researchers realized that if they added another structure below the surface, they could then form macro-cracks at the meeting between the surface and the ice. They called this mechanism MACI for a macro-crack initiator.

As the cracks grow, the ice is less and less likely to stay on the surface. The MACI holds the key to getting rid of ice build-up on surfaces.

To test this idea, Zhang and his colleagues created subsurface layers that had microholes or pillars. They made a thin film of a substance called polydimethylsiloxane (PDMS), which covered the holey, bumpy substructure layers.

They tested the design of the MACI inner structures using multiple layers with inner holes. The researchers found that surfaces that had the MACI substructures had ice adhesion strengths that were 50% weaker than the pure PDMS surfaces without MACI. A surface with the MACI design had some of the lowest values for ice adhesion ever measured.

"The ice adhesion strength for common outdoor steel or aluminum surfaces is around 600-1000 kPa," Zhang said. "By introducing the novel MACI concept to the surface design, we reached the super-low ice adhesion value of 5.7 kPa."

Zhang’s team needs to develop the idea more but they believe they have cracked the code to prevent dangerous ice buildup while limiting unwanted environmental effects.

"Traditional active de-icing techniques... can have major detrimental effects on structures and the environment," Zhang said. "But passive super-low ice adhesion surfaces avoid all those detrimental effects. This is very interesting not only for the scientific community, and for Arctic applications, but for solar panels, for shipping and transmission lines. There are a lot of applications related to everyday life."

Zhang and his team are now working to establish an NTNU Anti-icing Lab that would have state-of-the-art facilities to study the initiation of ice formation, aka ice nucleation, and the different properties of surfaces when it comes to ice adhesion.

The lab will support fundamental anti-icing research and provide a testing service and material selection guidance for Norwegian industry.

A paper on this research was published in Soft Matter.

By posting a comment you confirm that you have read and accept our Posting Rules and Terms of Use.
Re: Researchers Found a Way to Stop Ice Build Up By Cracking It
#1

"...In the winter, airplanes can develop ice buildup, which is very jealous. ..."

I wonder how they can tell. Is it green, perhaps? No, wait, that's envy. I get those confused sometimes.

Re: Researchers Found a Way to Stop Ice Build Up By Cracking It
#2

Good grief. We've been using air inflated rubber boots on aircraft wing leading edges for decades. This is not a "break-thru" technology.