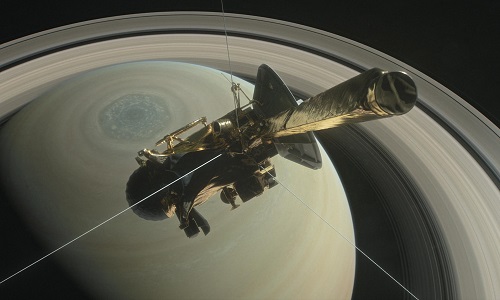 An artist's illustration of Cassini near Saturn. Source: NASA In August, NASA announced the final five missions of the Cassini spacecraft around Saturn following a 13-year tour of the planet’s system.

The final mission will be an intentional plunge into the planet to ensure Saturn’s moons, particularly Enceladus with its subsurface ocean and signs of hydrothermal activity, remain pristine for future exploration. That event is set to happen on Friday, Sept. 15 as it concludes its Grand Finale mission of 22 dives close to the atmosphere of the planet and in between its rings —something that has never happened before.

During the final mission, Cassini will enter Saturn’s atmosphere at about 7:55 a.m. EDT at an altitude of about 1,190 miles just above the cloud tops. During the dive into the atmosphere, the spacecraft will speed to about 70,000 miles per hour.

Cassini will fire short bursts of thrust to work against the thin gas in the atmosphere and to keep the saucer-shaped high-gain antenna pointed at Earth to relay final data to NASA. As the atmosphere thickens, the thrusters will be forced to ramp up going from 10 to 100 percent of their capacity in the space of about a minute. At this point, Cassini will begin to tumble.

NASA expects the loss of signal at about 930 miles above Saturn’s cloud tops where Cassini will begin to burn up like a meteor. In the 30 seconds following the signal loss, the spacecraft will come apart within minutes where the remnants will be completely consumed in the atmosphere of Saturn, NASA says.

"The spacecraft's final signal will be like an echo. It will radiate across the solar system for nearly an hour and a half after Cassini itself has gone," said Earl Maize, Cassini project manager at NASA's Jet Propulsion Laboratory (JPL) in Pasadena, Calif. "Even though we'll know that, at Saturn, Cassini has already met its fate, its mission isn't truly over for us on Earth as long as we're still receiving its signal."

Cassini’s 12 scientific instruments will collect data during the final plunge including its Ion and Neutral Mass Spectrometer (INMS) that will directly sample the composition and structure of Saturn’s atmosphere, something that can’t be done in orbit.

The live mission commentary and video from JPL Mission Control will air live from 7 to 8:30 a.m. EDT on Sept. 15. You can view the event at https://www.nasa.gov/live

By posting a comment you confirm that you have read and accept our Posting Rules and Terms of Use.
Advertisement
RELATED ARTICLES
Cassini to Begin its Final Orbits Around Saturn
The Most Beautiful Pictures of Saturn Ever Taken, Courtesy of Cassini
Final Days of Cassini
Watch: 3D-Printing Satellites in Space, Diamond Rain on Neptune and Uranus and the Death of the 19-Year-Old Cassini Spacecraft
NASA plans mission to explore Europa, the icy moon of Jupiter
Advertisement