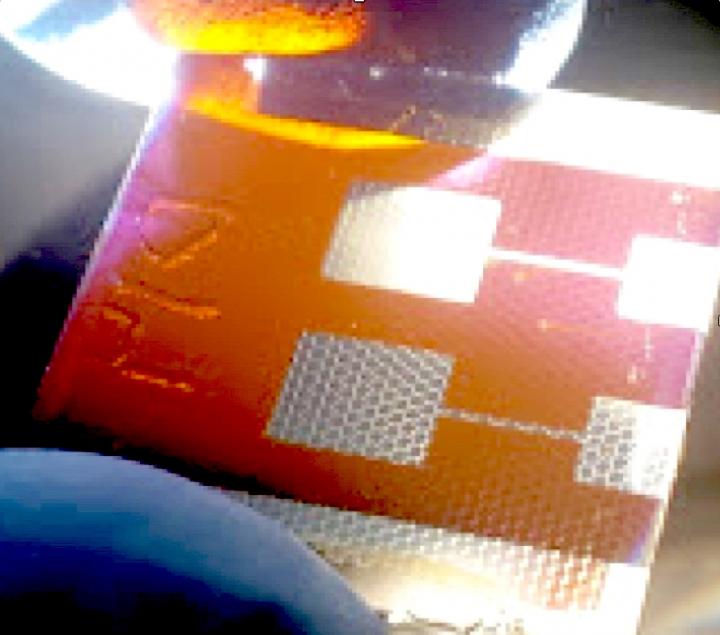 A compound solar cell illuminated from a light source below. Hexagonal scaffolds are visible in the regions coated by a silver electrode. The new solar cell design could help scientists overcome a major roadblock to the development of perovskite photovoltaics. Source: Stanford University

A new generation of advanced photovoltaics could be the result of packing tiny solar cells together, like the microlenses in the compound eye of an insect, according to a group of Stanford University scientists.

"Perovskites are promising, low-cost materials that convert sunlight into electricity as efficiently as conventional solar cells made of silicon," said Reinhold Dauskardt, a professor of materials science and engineering and senior author of the study. "The problem is that perovskites are extremely unstable and mechanically fragile. They would barely survive the manufacturing process, let alone be durable long-term in the environment."

"Perovskites are the most fragile materials ever tested in the history of our lab," said graduate student Nicholas Rolston, a co-lead author of the E&ES study. "This fragility is related to the brittle, salt-like crystal structure of perovskite, which has mechanical properties similar to table salt."

In order to address the durability issues, the researchers looked to nature.

"We were inspired by the compound eye of the fly, which consists of hundreds of tiny segmented eyes," Dauskardt explained. "It has a beautiful honeycomb shape with built-in redundancy: If you lose one segment, hundreds of others will operate. Each segment is very fragile, but it's shielded by a scaffold wall around it."

The researchers used the compound eye as a model and created a compound solar cell that consists of a vast honeycomb of perovskite microcells. Each honeycomb encapsulated in a hexagon-shipped scaffold of just 0.02 inches wide.

"The scaffold is made of an inexpensive epoxy resin widely used in the microelectronics industry," Rolston said. "It's resilient to mechanical stresses and thus far more resistant to fracture."

The tests that were conducted during the study revealed the scaffolding had little effect on perovskite’s ability to convert light into electricity.

"We got nearly the same power-conversion efficiencies out of each little perovskite cell that we would get from a planar solar cell," Dauskardt said. "So we achieved a huge increase in fracture resistance with no penalty for efficiency."

Now the researchers questioned the durability of their product. To find this out, the researchers exposed encapsulated perovskite cells to temperatures of 185° F (85° C) and 85 percent humidity for six weeks. The cells continue to generate electricity at relatively high rates of efficiency even in these extreme conditions.

Dauskardt and colleagues have filed a patent for the new technology. In order to improve efficiency, they are looking for new ways to scatter light from the scaffold into the perovskite core of each cell.

A paper on this study was published in Energy & Environmental Science.

Re: Honeycomb of Solar Cells Saves Space and Works in Harsh Conditions
#1

So will this also work with the advancement of TPV solar cells? (Thermo-Photovoltaic).

Re: Honeycomb of Solar Cells Saves Space and Works in Harsh Conditions
#2

Starting about 20 years ago, folks began looking at the conversion efficiencies, etc. of non-planar non-concentrating fixed position PV cells; i. e., various degrees of curvature, warping, etc. of various cell chemistries, layering, electrodes, etc. I recall a Portuguese researcher who found a few percent improvement with a slight amount of curvature along the outboard 50 percent of the total rectangular footprint cell area, with a bit more of curvature at the corners for whatever his cell chemistry and layer to layer structure was. He also had a custom electrode pattern that was not uniform from the center of the cell to its edges.

Of course, the big deal is how would these be manufactured? Perhaps the Stanford hexcell base could be advanced as a non-planar solution for perovskite.

Re: Honeycomb of Solar Cells Saves Space and Works in Harsh Conditions
#3
In reply to #2
James Stewart

As to the comments about developing this for Perovskite cells, it is important due to the fragile nature of the Perovskite analog crystals. If they can ever stabilize these, it will be fantastic, because they can tweak the composition to tune them to select different bands of sunlight wavelengths. Multi-layered PV cells still have the record for highest net efficiency, if my memory serves me.