O-rings are the most widely-used seals because they are efficient, economical, and can be used in a wide variety of static and dynamic applications. In order to get the most out of an O-ring, it is critical that its dimensions and specifications meet part requirements. Sometimes, this can be difficult if a part is metric and the only available seals have Imperial dimensions or vice versa. Still, this is not an insurmountable obstacle if an engineer knows the conversions involved. Here are some common seal units and the conversions between metric and Imperial units for them. 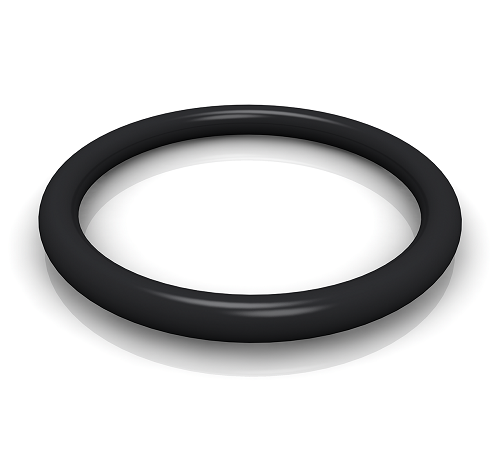 An O-ring. Source: Trelleborg Sealing Solutionsdistances from the center to the O-ring’s inside and outside surfaces, respectively. The cross section is the difference between the outer and inner diameters. All three dimensions are typically given in millimeters (mm) for metric O-rings and inches (in) for Imperial O-rings.

One inch is equal to 25.4 mm, so when converting from an Imperial dimension to a metric dimension, simply multiply by 25.4 mm/in. In order to convert from metric to Imperial dimensions, multiply by the inverse of 25.4 mm/in, which is approximately 0.0394 in/mm. Imperial specifications are sometimes given as fractions (such as 1/3”) where the quote symbol after the fraction represents the Imperial unit inch. In these cases, the first step is to always convert the fraction to a decimal, then perform the unit conversion. Thus, for example, 1/3” = ~0.33 in = 0.33 in x 25.4 mm/in = ~8.5 mm.

To convert from Celsius to Fahrenheit, use the following formula:

To convert from Fahrenheit to Celsius, use the following formula:

The specifications of inner diameter, outer diameter, cross section, maximum pressure and operating temperature range are critical to accurately identifying the correct O-ring for an application. Consequently, it is imperative, when confronted by metric or Imperial units for these O-rings or their applications, that an engineer is able to convert between the two unit systems for those specifications. Although the metric and imperial units don’t have to exactly agree, it is a good idea to try to get them as close as possible for optimal O-ring performance and part life.

Re: Translating Imperial Units to Metric Sizes in O-Rings
#1

3) Then you proceed to state regarding cross-section, "the first step is to convert the fraction to a decimal, then perform the unit conversion". Regrettably, imperial sized o-rings with fractional nominal cross-sections do not have that measurement as their actual cross-section. You chose a non-existent imperial nominal cross section (1/3 inch) and ended up with 8.5mm as the wanted metric size. Sorry, imperial standard o-rings allow for a 10% compression, so 1/8 inch o-rings have a measured 0.139 inch cross- section, 1/4 inch o-rings have a measured 0.275 inch cross-section. See this typical reference chart:
https://www.marcorubber.com/o-ring-size-chart-british.htm

4) Metric o-rings however are normally described by their actual dimensions, therefore do not have that 10% assumption of installed compression. Hence, in the case of your mythical 1/3 inch imperial o-ring's nominal cross-section, its actual free cross-section would be 0.366 inches or ~9.3mm, not ~8.5mm.

5) Lower down, you imply that Fahrenheit degrees are imperial units and that Celsius degrees are metric units. No, neither of those measurement systems has any relationship with the inch or the meter. But your conversion formulae are spot-on.

Re: Translating Imperial Units to Metric Sizes in O-Rings
#2
In reply to #1
Afox

Good catch. I would like to know who the 'Sponsored Content' author is. They don't appear to have a review process before publication and must have assigned this task to an intern. Anyone familiar with O-rings would know the difficulty of finding its center with any accuracy. That is why O-rings are sized & measured by diameter. Although this author is fair with basic algebra, they have very little understanding of definitions (e.g., diameter vs radius) and its applications to the real-world.

Good luck in keeping the Center of the Known Industrial Universe focused.