Construction efforts at the Lake Oroville spillways are focused on repairing and reconstructing the gated flood control spillway, also known as the main spillway, by November 1.

The California Department of Water Resources says that although this date is "an aggressive timeline for construction," it’s a conservative date for reservoir operations.

Demolition, excavation, and site preparation is 99 percent complete for the 2,270 feet that will be reconstructed this year. (Watch an update on work progress at the Oroville site.)

In mid-February 2017, winter precipitation filled Lake Oroville north of California's capital, Sacramento, putting exceptional pressure on the Oroville Dam. The dam is a 770-foot-tall (230 meters) embankment dam that dates from 1968. The feared failure of the dam's spillway after a hole developed as water was being released prompted an evacuation order for 180,000 people downstream of the dam. (Read "Highest Dam in the U.S. Faces Threat.") 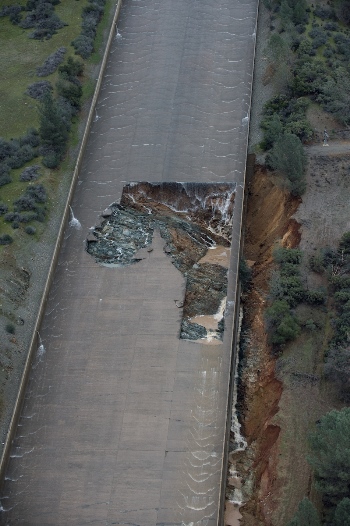 Photo from February 2017 shows extent of erosion damage at Oroville Dam. Credit: Calif. DWRCrews in early August placed the first structural concrete slabs, which include reinforced steel, on the lower portion of the spillway chute.

Progress is being made on excavating trenches, drilling bore holes, and placing concrete, which means the Department has a "clearer schedule" for construction of the underground cutoff wall, with a target completion date of late December 2017 or early January 2018.

The project's prime contractor, Kiewit, brought in a heavy-duty percussion drilling rig – the BG Bauer 50 – to improve the current rate of drilling.

A Forensic Team finished conducting interviews with Department employees in Sacramento. The Department also is encouraging employees to share any information they have that could help with the investigation of the accident. The Forensic Team’s final report is scheduled to be released this fall.