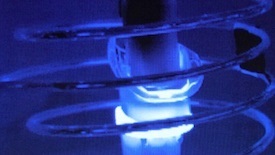 Bacterial infections on artificial joints used in knee and hip replacements are a common and serious complication. The bacteria tend to form slimy films on the metal surfaces of the joints called biofilms, which are difficult to treat using antibiotics.

Scientists at the University of Texas Southwestern Medical Center have developed a new technique using high-frequency alternating magnetic fields (AMFs) to heat artificial joints in the body and destroy bacterial films on their surfaces.

Electrical currents are produced on metal in the presence of AMFs, resulting in heat generation. If the direction of the magnetic fields is rapidly switched back and forth (i.e., high frequency), then electrical currents only flow along the outer edge of the metal, which is where the biofilm is.

By posting a comment you confirm that you have read and accept our Posting Rules and Terms of Use.
Advertisement
RELATED ARTICLES
Microrobots may someday perform dental cleanings
Team develops 3D printing technique to manufacture biofilms
Liquid metals battle superbugs without drugs
New fungal cleaning products remove biofilms from medical tools and food processing equiptment
Plastic and Its Impact on the Medical Industry
Advertisement