There’s a lot of junk in space: hundreds of thousands of manmade objects orbit the Earth, but fewer than 5,000 are operational satellites. Low Earth Orbit, within 2,000 km of the planet’s surface, is the most congested area. The situation poses a hazard to existing satellites, as collisions can cause further debris.

An alternative to the traditional but expensive de-orbiting rocket method used to tackle this trash is being sought by the UK Defence Science and Technology Laboratory. Its Daedalus experiment is exploring the effect on satellites of so-called Icarus ‘de-orbit sails’, made of 25 micrometer-thick aluminum-coated Kapton, a high heat-resistant polyimide film. When deployed, the sail increases drag, causing a controlled descent into the Earth’s atmosphere where the satellite will burn up.

CanX-7, a Canadian satellite, deployed its de-orbiting sail in early May 2017 and is expected to burn up in the 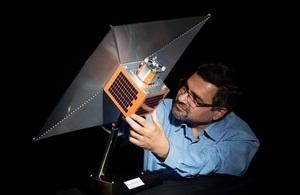 Model of a satellite with the space sail. (Source: UK Defence Science and Technology Laboratory)Earth’s atmosphere in around two years’ time. Two other satellites, TechDemoSat-1 (TDS1) and Carbonite-1 (CBNT1), have been fitted with Icarus de-orbit sails created by Cranfield University and are expected to start their descents later this year.

The experimental results will help to characterize changes in the brightness of the satellite caused by the sail deployment, quantify the drag increase due to the de-orbit sail, and critically compare different orbital dynamics models. Of particular relevance to the military community is the effect that such high-drag satellites have on current space situational awareness sensors and processing.

I like this idea a lot: space junk that self-destructs. Engineering360 has had a few articles recently about the problem and suggested methods for cleaning up what's out there, including an experimental mission by a group in Japan.

Maybe we need the low-earth-orbit equivalent of a Dempster Dumpster (which was invented in my home town).