Video: How to Expand the Power of Light Microscopy

The capacity of conventional light microscopes to achieve the diagnostic power of expensive, high-resolution electron microscopes is realized with a technique developed by researchers from MIT and Harvard Medical School.

Expanding a tissue sample to 100 times its original volume before imaging it enables visualization of features typically only seen with high-resolution microscopes. The expansion microscopy method also highlights some additional molecular details not available with the electron microscope.

Originally developed at MIT, the process embeds tissue samples in a dense polymer that swells with the addition of water. The molecules to be imaged are first anchored to the polymer gel, after which proteins that hold tissue together are digested. The resulting enlargement allows scientists to generate images with a 70 nm resolution, which is traditionally only possible with specialized equipment.

The researchers adapted the process for biopsy tissue samples, which are usually embedded in paraffin wax, 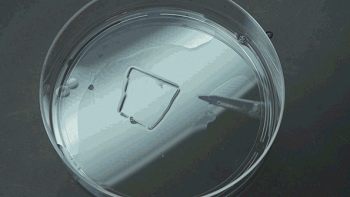 The expansion technique reveals additional molecular information that the electron microscope cannot provide. (Photo: Jimmy Day/MIT Media Lab)flash frozen or stained with a chemical that makes cellular structures more visible. Samples were converted into a state suitable for expansion by removing the chemical agent or paraffin by exposure to xylene solvent, followed by heating in citrate and application of the expansion process. Stronger digestion steps are included in this protocol to compensate for the strong chemical fixation of the samples. Fluorescent labels can be added for molecules of interest.

The technique was applied to tissue samples from patients with early-stage breast lesions. A machine learning algorithm used in the analysis was able to distinguish between lesions that were likely to become invasive and those that were not, with an accuracy of 93 percent on expanded samples compared to only 71 percent on the pre-expanded tissue.

Kidney tissue samples from patients with nephrotic syndrome, which impairs the kidneys’ ability to filter blood, were also analyzed. The tiny finger-like projections that filter blood are spaced about 200 nm apart and can usually be seen only with electron microscopes or expensive super-resolution microscopes.