The first Antarctic voyage of Boaty McBoatface has provided U.K. researchers with an abundance of data on 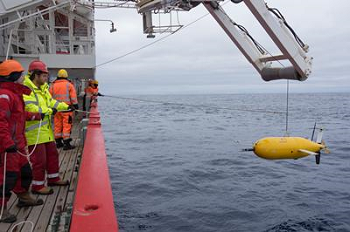 Boaty being deployed. Image credit: Povl Abrahamsen, BASsome of the coldest abyssal ocean waters on Earth. The autonomous underwater vehicle (AUV) developed by the National Oceanography Centre documented temperature, speed of water flow and underwater turbulence rates of the Orkney Passage, a region of the Southern Ocean that is around 4,000 meters deep and roughly 500 miles from the Antarctic Peninsula.

The information was collected as part of the DynOPO (Dynamics of the Orkney Passage Outflow) seven-week expedition, with the RRS James Clark Ross returning to Southampton in June.

The AUV, representative of the Autosub Long Range (ALR) class of unmanned submersibles, completed three missions during the expedition, the longest lasting three days, traveling more than 180 kilometers and reaching depths of nearly 4,000 meters. It traveled back and forth through an abyssal current of Antarctic Bottom Water (AABW) along the Orkney Passage, sometimes in water colder than 0 degrees Celsius and in currents up to 1 knot, while measuring the intensity of turbulence.

Evidence suggests that changing winds over the Southern Ocean affect the speed of seafloor currents carrying AABW. The speed of these currents determines how turbulent their flow is around underwater mountain ranges. Faster flow is more turbulent, and in this turbulence more heat is mixed into AABW from shallower, warmer ocean layers — thus warming the abyssal waters on their way to the Equator, affecting global climate change.

The enlarged dataset will be analyzed by researchers from University of Southampton, British Antarctic Survey and the National Oceanography Centre.

The Autosub was named following last year’s campaign by the Natural Environment Research Council to name the UK’s new polar research ship. While the ship will be named after famous naturalist and broadcaster Sir David Attenborough, the popular suggestion of the contest — Boaty McBoatface — lives on in the form of the yellow submersible that will support the research ship to explore parts of the polar regions inaccessible to humans.