Unlike bulky conventional solar panels used to power satellites, a new solar array design rolls up into a compact cylinder for launch. With less mass and volume, the Roll-out Solar Array (ROSA) can provide cost savings, as well as an increase in power for satellites. 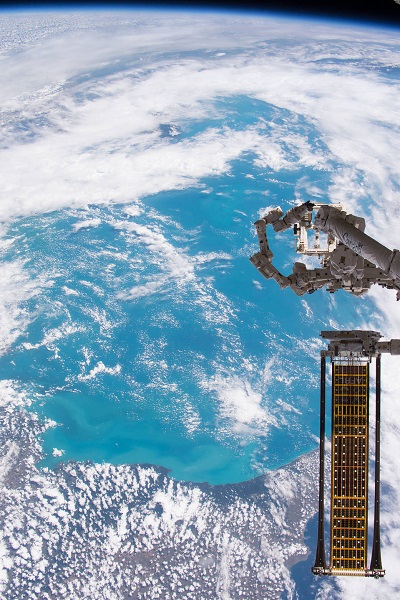 The Roll-out Solar Array was deployed from the end of the Canadarm2 robotic arm outside the International Space Station. (Source: NASA Johnson)

ROSA consists of a center wing made of a flexible material containing photovoltaic cells to convert light into electricity. On either side of the wing is a high strain composite boom, a narrow arm that extends the length of the wing to provide support. The booms are like split tubes made of a stiff composite material, flattened and rolled up lengthwise for launch. The array rolls or snaps open without a motor, using stored energy from the structure of the booms that is released as each boom transitions from a coil shape to a straight support arm.

During June 17 and 18, 2017, engineers on the ground remotely operated the International Space Station's robotic Canadarm2 to extract ROSA from the SpaceX Dragon resupply ship. Researchers will test its effectiveness as the solar equipment remains attached to the Canadarm2 over seven days.

ROSA was developed as part of the Solar Electric Propulsion Project sponsored by NASA’s space technology mission directorate. NASA tested the technology in vacuum chambers on Earth several years ago, and this is its first test to evaluate how this type of solar panel deploys in the microgravity and extreme temperatures of space. The investigation also measures the array’s strength and durability and how the structure responds to spacecraft maneuvers.

Researchers will monitor the array deployed in full sun and full shade and collect data on how much it vibrates when moving from shade to light. This vibration, known as thermal snap, could present challenges in operating satellites with sensitive functions, and the researchers want to learn how to avoid those challenges with ROSA.

ROSA can be easily adapted to different sizes, including very large arrays, to provide power for a variety of future spacecraft. It also has the potential to make solar arrays more compact and lighter weight for satellite radio and television, weather forecasting, GPS, and other services used on Earth. In addition, the technology conceivably could be adapted to provide solar power in remote locations.

By posting a comment you confirm that you have read and accept our Posting Rules and Terms of Use.
Advertisement
RELATED ARTICLES
Orion Solar Array Test Is Termed a Success
Video: Spacewalks update ISS with new solar arrays
Soaring through space on solar sails
Military UAVs Soar on Solar Power
Manufacturing in Space: Part 2
Advertisement