A more cold hardy lithium battery engineered at University of California (San Diego) will extend electric vehicle range in cold climates. These batteries and electrochemical capacitors could also be used to power high-atmosphere Wi-Fi drones and weather balloons, satellites and other craft in the extreme cold.

High performance is still maintained at room temperature, and the new electrolyte chemistry could also increase the energy density and improve the safety of lithium batteries and electrochemical capacitors. 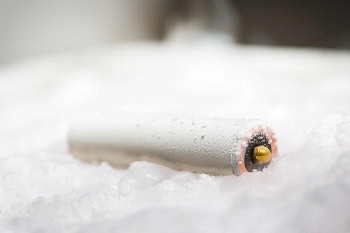 New electrolytes made from liquefied gas enable lithium batteries and electrochemical capacitors to run at extremely cold temperatures. (Source: David Baillot/UC San Diego Jacobs School of Engineering)Due to their low viscosity, the liquefied gas solvents are resistant to freezing. These batteries will be unable to self-heat at temperatures much higher than room temperature, eliminating the thermal runaway problem. And under severe conditions, such as an automobile accident when the battery is crushed and shorted, the electrolyte gas may vent away from the cell and, due to the lack of electrolyte conductivity, prevent the thermal runaway reaction which would otherwise be difficult to avoid with conventional liquid electrolytes.

The interphase formed on the electrode is a highly uniform and dendrite-free surface allowing for a high Coulombic efficiency of over 97 percent and improved battery conductivity. This is also the first time an electrolyte has been shown to have high performance on both lithium metal and classical cathode materials, which could allow for a substantial increase in the overall energy density of batteries.