Batteries that “Drink” Seawater Could be Used to Power Submersible Drones 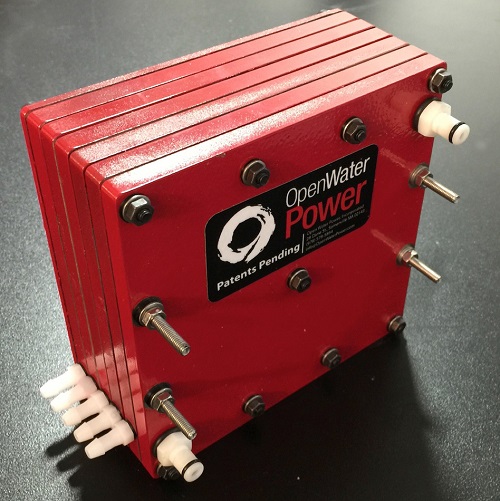 The battery that uses sea water to operate and only becomes active when flooded with water. (Source: MIT)MIT spinout Open Water Power (OWP) has developed a new power system that allows unpiloted underwater vehicles (UUVs) — commonly referred to as submersible drones — to dive deeper, stay down for longer and have an increased range.

The new aluminum-water power system could find a wide range of uses including exploring ship wrecks, mapping the ocean floor, long-range oil prospecting or conducting research. While originally developed for UUVs, OWP says the system could be grafted to other marine vessels such as ocean-floor monitoring systems, sonar buoy systems or other marine-research devices.

While most UUVs use standard lithium-ion based batteries, these batteries have known to have issues, such as catching fire, a low energy density (leading to frequent recharging) and the batteries must be encased in expensive metal pressure vessels.

The system developed by OWP is safer, cheaper and long-lasting, consisting of alloyed aluminum, a cathode alloyed with a combination of elements including nickel and an alkaline electrolyte that’s positioned between the electrodes.

When the power system is in the ocean, sea water is pulled into the battery and split at the cathode into hydroxide anions and hydrogen gas. The hydroxide anions interact with the aluminum anode creating aluminum hydroxide and releasing electrons. These travel back toward the cathode, creating energy to a circuit along the way to begin the cycle again.

The aluminum hydroxide and hydrogen gas are jettisoned as harmless waste, and the components only become activated when flooded with water. Once the aluminum anode corrodes, it can be replaced on the cheap.

“Our power system can drink sea water and discard waste products,” says Ian Salmon McKay, MIT graduate and co-founder of OWP. “But that exhaust is not harmful, compared to exhaust of terrestrial engines.”

OWP says with this system, UUVs can be launched from shore and don’t need service ships. This may allow for new opportunities never before explored, such as oil prospecting over hundreds of miles before needing to be returned for a new power system.