The resulting report, commissioned by Scottish Natural Heritage, Marine Scotland, and EMEC, documents little evidence of long-term effects [pdf] on use of the seas by birds and marine mammals as a result of the operation and installation of such devices at the test sites. 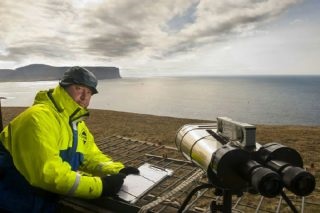 Wildlife observations at Black Craig, Billia Croo. (Source: EMEC/Mike Brookes-Roper)The detailed records on marine mammal and birds present at sea, in and around the test berths, were collected through the Wildlife Observation Program that ran alongside device testing at EMEC. Ten species/species groups were analyzed from each site.

The study detected no significant changes in wildlife distribution around the test berths at the wave energy test site at Billia Croo.

Observations at the Fall of Warness tidal test site showed slightly reduced numbers in some species in the vicinity of the test berths after construction work started. However, in all cases this returned to previous levels during subsequent deployment and operation of the turbines, suggesting that increased vessel activity associated with installation is likely to be causing this change in distribution.

For most other species, no such pattern of change around the Falls of Warness test berths could be detected.