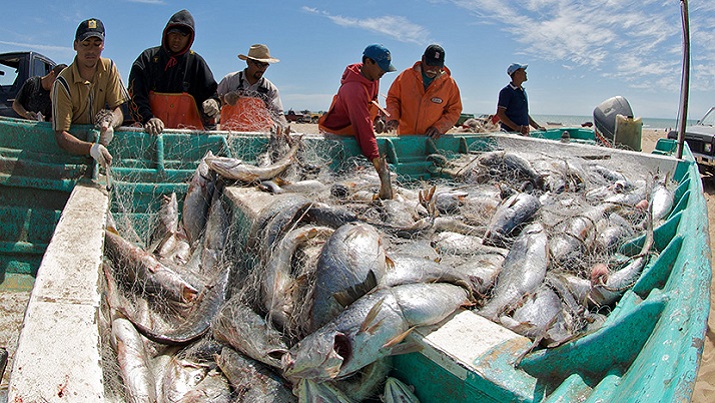 Fishers unloading Gulf corvina. Each boat's catch can exceed one ton. (Credit: Octavio Aburto-Oropeza)I bet you didn’t know that some fish make incredibly loud sounds when they gather to spawn.

But a team led by marine scientists from the University of Texas Marine Science Institute (UTMSI) and the Scripps Institution of Oceanography at the University of California San Diego has developed an inexpensive yet accurate way to use those distinctive sounds to protect the fish from overfishing. The researchers’ work opens an acoustic window to estimating how many fish are in a spawning aggregation based on their mating calls. It’s that sort of data that could help fisheries to design effective management practices, and monitor the ongoing health of a fishery.

Overfishing is a problem that affects about a third of the world’s fish stocks, and species that spawn seasonally in large groups are especially vulnerable – easy for fishers to locate, and often plucked from the water before they’ve seeded the next generation.

The team developed the method specifically for the Gulf corvina, a fish native to the cool northern waters of the Gulf of California. The fish is particularly vulnerable to overfishing because of its limited range – it cannot survive in the warmer waters to the south. The method, however, can be adapted to any fish that make courtship sounds.

And about those sounds… each spring, the entire adult population of Gulf corvina – more than 2 million fish — migrates to a small area at the gulf’s northern tip. The males start calling to attract mates, and the sound is deafening. According to Scripps grad student Timothy Rowell, the lead author on the team’s recently-published study, the fish can make sounds up to 192 dB – enough to damage eardrums if it were on land. “It’s louder than a rock concert,” adds Brad Erisman, an assistant professor at UTMSI and senior author on the paper. “It’s louder than standing less than a meter from a chain saw.”

Those sounds lead fishers right to the spawning aggregations, where over a million fish can be easily harvested over about 20 nights each spring. Anecdotal evidence points to a rise in illegal fishing, and that the fish being caught are getting smaller over time. “Over-harvesting from the aggregation site could result in the functional extinction of the species in the ecosystem, which would have negative effects on the local economy and cause the fishery to collapse,” said Rowell. “This is why sustainable harvest levels need to be set. At the moment we do not know what these levels are.”

Erisman and Rowell belong to an international research group, the Gulf of California Marine Program. It has created an interactive online tool called dataMARES that allows anyone to study how corvina populations are changing – with maintaining sustainability as the ultimate goal.

“The idea is we try to bring all the stakeholders, different groups that have a vested interest in the fishery and the environment, together to try to work it out,” says Erisman. “And it's nice that science is playing a role in that.”

Re: Loud Mating Calls Could Lead to Species' Survival
#1

Well, there's always another fish in the sea. Someday that drum will find true love.

Back in the hills of the Ozark Mountains, we used to have what are called "Hog Callings". These competitions were to see who had the loudest, most elaborate "Sooooeeee Pig!" call. Some girls in the competition did catch a man this way.

What Hillbilly would not want a gal that can draw in the hogs?

Re: Loud Mating Calls Could Lead to Species' Survival
#2

Go to any singles bar and you will observe the exact same phenomena. How else can you explain why that trait did not get eradicated from the gene pool?

Re: Loud Mating Calls Could Lead to Species' Survival
#3
In reply to #2
James Stewart

As far as gals drawing in the hogs, I must agree. Most of us guys can only draw flies.