A team of engineers at Duke University have developed a printed sensor that is inexpensive and monitors tire wear in real time. It warns drivers when their tires have become very worn and dangerous. The team hopes that, if adopted, the sensor would increase safety, reduce fuel consumption and improve the performance of vehicles.

The team collaborated with the Automotive Design Group to demonstrate their design that uses metallic carbon nanotubes. The nanotubes can track millimeter-scale changes in tread depth. The tracking is 99 percent accurate.

"With all of the technology and sensors that are in today's cars, it's kind of crazy to think that there's almost no data being gathered from the only part of the vehicle that is actually touching the road," said Aaron Franklin, associate professor of electrical and computer engineering at Duke. "Our tire tread sensor is the perfect marriage between high-end technology and a simple solution." 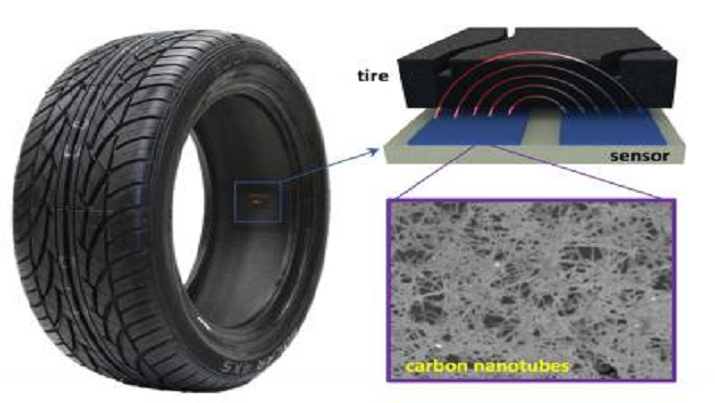 This is an illustration of how the novel tread sensor works. The sensor is placed on the inside of the tire, where the tire wall and tread interferes with an electric field that arcs between two electrodes. That interference can be measured to determine the thickness of the rubber with millimeter accuracy. (Joseph Andrews, Duke University)

Tests proved that the metal mesh that is in tired won’t disrupt the operation of the sensors, something that researchers worried about while developing the product.

This sensor could be made from many different products, but the researchers believe that they have found the best materials, ink, size, and structure. They found the best results when they printed the electrodes made of metallic carbon nanotubes on a polyimide film. The metallic carbon nanotubes are strong enough to survive on the inside of a tire. The sensors can be printed on most materials as long as it is printed with an aerosol jet printer.

The researchers want to explore using these sensors for other areas in the car too, like brake pads for tire pressure in the tires.

"This setup could be used with just about anything that isn't metallic or too thick," said Franklin. "Right now we're focusing on tires, but really anything you'd rather not have to cut apart to determine its thickness could be monitored by this technology in real time."

The research was published in the IEEE Sensors Journal.

By posting a comment you confirm that you have read and accept our Posting Rules and Terms of Use.
Advertisement
RELATED ARTICLES
Watch: Worn out tires could find new use in concrete. A printed sensor measures automobile tire wear. And an all-electric trash truck.
Goodyear Reveals Spherical Concept Tire for Autonomous Cars
The Driverless Tire from Michelin
Michelin Unveils New Airless Tire Design Inspired By Coral
Wireless Inductance-Capacitance Sensor from NASA
Advertisement