Commercial thermoelectric devices, based on materials such as solid-state bismuth telluride, operate at about 500 C, too low a temperature to effectively exploit the large amounts of waste heat generated in glass and steel production. MIT researchers designed a thermoelectric system that does operate at temperatures relevant to industrial use. In addition, the new device is based on a molten compound of tin and sulfur which is significantly cheaper than bismuth telluride.

A thermoelectric test cell was built that operates in a liquid state at temperatures from 950-1,074° C (1,742-1,965° F). Once melted, tin sulfide provides a consistent thermoelectric output over a wide temperature range up to 200 degrees above its melting point of 882° C. No significant performance drop was observed as the device cycled up to 1,074° C and back down to 950° C over several hours. 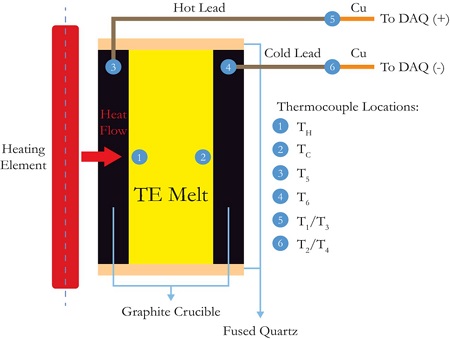 Thermoelectric devices work by sandwiching together materials that produce an electric voltage when there is a temperature difference between their hot and cool sides. In reverse, they can be used as cooling devices turning an electric current into a temperature drop.

The research can have a large impact on metals producers who already handle hundreds of thousands of tons per year of copper sulfide, iron sulfide, and similar materials in their molten state, but who don’t currently take advantage of the materials’ semiconducting properties. Other merits of the proposed system include the simplicity of handling tin and sulfur, the semiconducting mixture’s relatively high electrical conductivity, and relatively low toxicity compared to compounds such as tellurium and thallium or lead and sulfur.

This is clearly a "hot" development. I wonder if there are analogous materials that could be molten at much lower temperatures (such as organic salts), that would function well in the range 70-100 C?