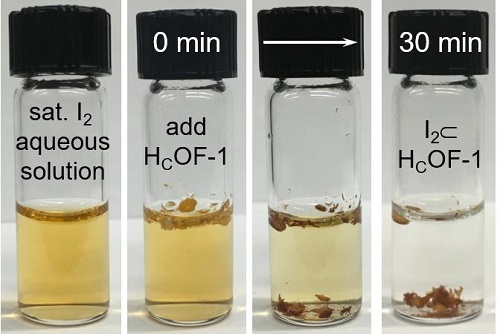 After 30 minutes, much of the iodine in the water has been adsorbed by the material. Source: Dartmouth CollegeA new material that scrubs iodine from water may hold promise for cleaning radioactive waste in nuclear reactors and after nuclear accidents such as the 2011 Fukushima disaster or Chernobyl.

Researchers at Dartmouth College created the microporous material by chemically stitching small organic molecules to form a framework that scrubs the iodine isotope from water. Radioactive iodine is commonly a byproduct of nuclear fission and is a pollutant in nuclear disasters including the ones in Japan and Russia. While removing iodine in the gas phase is common, iodine has never been removed from water before, Dartmouth claims.

"There is simply no cost-effective way of removing radioactive iodine from water, but current methods of letting the ocean or rivers dilute the dangerous contaminant are just too risky," said Chenfeng Ke, assistant professor in the Department of Chemistry at Dartmouth College. "We are not sure how efficient this process will be, but this is definitely the first step toward knowing its true potential."

Researchers created a porous material with a high crystallinity that is also chemically stable in strong acidic or basic water. The material combats environmental pollution and paves a way for a new class of porous organic materials, Ke says.

During the research, Dartmouth says concentrations of iodine were reduced from 288 parts per million (ppm) to 18 ppm within 30 minutes and below 1 ppm in 24 hours. Using the soft stitching technique the material changed shape and adsorbed more than double its weight of iodine. The compound was also found to be elastic, making it reusable.

Researchers liken the process to applying salt to contaminated water. Since it is lighter than water, the material floats to adsorb iodine and then sinks as it becomes heavier. The compound can then be collected, cleaned and reused while the radioactive elements are disposed of.

While researchers used non-radioactive iodine in salted water for the project, they believe it should stand up in real-world conditions. Future testing will prove how effective the material is against cesium and other radioactive contaminants found in nuclear plants.

“It would be ideal to scrub more radioactive species other than iodine – you would want to scrub all of the radioactive material in one go,” said Ke.

The full research report can be found in the Journal of the American Chemical Society.

By posting a comment you confirm that you have read and accept our Posting Rules and Terms of Use.
Advertisement
RELATED ARTICLES
Stabilizing Nuclear Waste with Glass and Ceramics
Silver chloride mitigates radioactive contamination of soil
Research Could Save Money and Reform Nuclear Waste Reprocessing
The Unfulfilled Promise of Chemical Lasers
Remotely monitoring nuclear reactor off-gas in real time
Advertisement