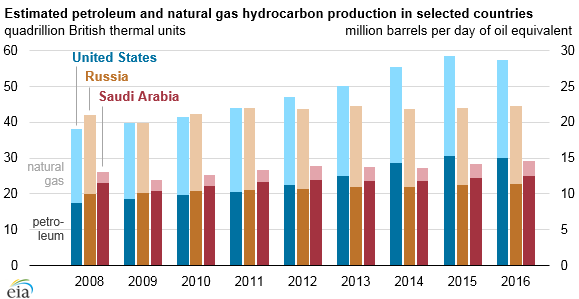 Crude oil and lease condensate in the U.S. accounted for around 60% of total petroleum hydrocarbon production in 2016. In Saudi Arabia and Russia, the share is much greater, as those countries produce lesser amounts of natural gas plant liquids. They also have smaller volumes of refinery gain and biofuels production.

Russian hydrocarbon production has risen as capital expenditure spending on exploration and production increased. Russia also has favorable tax regimes and exchange rates (Russian company expenditures are in Russian Rubles, but oil sales are in U.S. Dollars) that resulted in record levels of Russian petroleum production in the second half of 2016.

In contrast to past actions to raise or lower oil production levels to balance global oil markets, Saudi Arabia did not reduce its petroleum production between late 2014 and 2016 in an effort to defend its market share, even as prices remained low and world oil inventories continued to grow. In 2016, Saudi Arabia's total petroleum and natural gas hydrocarbon production rose by 3%.

This outlook takes into account recent agreements among OPEC member countries, as well as pledges by key non-OPEC producers, including Russia, to restrain production. In November 2016, OPEC had agreed to production cuts that would last through the first half of 2017. At their May 25 meeting, OPEC agreed to extend these cuts through March 2018.

By posting a comment you confirm that you have read and accept our Posting Rules and Terms of Use.
Advertisement
RELATED ARTICLES
US cruises past oil and gas production rivals
China Passes U.S. as Largest Crude Oil Importer
Crude Oil Market Turmoil Could Mean “Back to the Future” Experience for Petrochemicals, IHS Says
Saudi Aramco Insists Oil and Gas Will Be Key To Future Energy Mixes
API Report: June 2018 Marks Highest Ever Production of US Crude Oil, Natural Gas Liquids
Advertisement