Unconventional oil and gas production is not currently a major source of methane or benzene in drinking water wells in some areas of Arkansas, Louisiana, and Texas, according to a U.S. Geological Service (USGS) report. These production areas include the Eagle Ford, Fayetteville, and Haynesville shale formations, which are some of the largest sources of natural gas in the U.S. and have trillions of cubic feet of gas.

This is the first study of these areas to systematically determine the presence of benzene and methane in drinking water wells near unconventional oil and gas production areas in relation to the age of the groundwater. Methane and benzene, produced by many unconventional oil and gas wells, have various human health implications when present in high concentrations in drinking water. 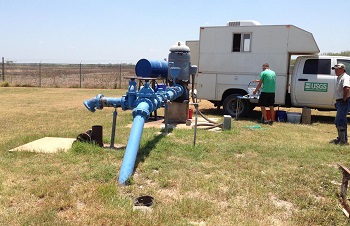 The agency, which pioneered the ability to determine the age of groundwater, says data indicates that groundwater moves relatively slowly in these aquifers. Decades or longer may be needed to fully assess the effects of unconventional oil and gas production activities on the quality of groundwater used for drinking water.

The analysis covered 116 domestic and public-supply wells in Arkansas, Louisiana, and Texas that were located as close as 360 ft to unconventional oil and gas wells. Methane was detected in 91 percent of the wells and, of those, 90 percent had methane concentrations lower than the threshold of 10 mg/l. The U.S. Department of the Interior Office of Surface Mining, Reclamation, and Enforcement proposed this threshold for the purposes of protection from explosive risk. Most of the methane detected in groundwater was from naturally occurring microbial sources at shallow depths rather than deep shale gas.

Groundwater in the Louisiana and Texas study areas typically entered the aquifers several thousand years ago. Nearly all the benzene detected in those areas occurred in old groundwater, indicating it was from subsurface sources such as natural hydrocarbon migration or leaking oil and gas wells. In Arkansas, groundwater was much younger — typically less than 40 years old. Benzene was detected in one sample of young groundwater in Arkansas that could be associated with a surface release associated with unconventional oil and gas production activities.

By posting a comment you confirm that you have read and accept our Posting Rules and Terms of Use.
Advertisement
RELATED ARTICLES
Report reveals double the number of abandoned oil and gas wells in US than previous reports
Study: Differences in the environmental toll of fracking versus conventional drilling are negligible
California Air Board Adopts Methane Emission Rule
Study determines cost of plugging, reclaiming orphaned oil and gas wells
Drones will locate and map abandoned wells in New York
Advertisement