Earlier Cancer Detection Made Possible by University of Illinois Engineers

Early detection of cancer cells will be the non-plus ultra of medicine, requiring many new methods and developments along the way. One such method has been presented by a research team at the University of Illinois, Urbana-Champaign College of Engineering.

The research team, led by Logan Liu and Lynford Goddard, associate professors of electrical and computer engineering, included students Abid Ameen and Lisa Hackett. Together, the team developed a new plasmonic sensor that can reliably detect and read the biomarkers designed for most types of cancer. The researchers predict it will also be able to detect other diseases.

The researchers chose to focus on certain biomarkers, one of which being the carcinoembryonic antigen (CEA) because most humans carry at least 3 to 5 nanograms per milliliter of CEA. The presence of higher concentrations of CEA is an early indication of some forms of cancer, including lung, breast and prostate cancers. The team of researchers developed their plasmonic detector to be capable of detecting 1 nanogram per milliliter.

"Cancer is one of the major causes of death in the United States as more than half of the new patients are diagnosed after it has already spread," Ameen explained. "This shows the gravity with which this problem needs to be addressed, and this new design of a plasmonic sensor helps to detect the lower concentration of CEA at an earlier state." 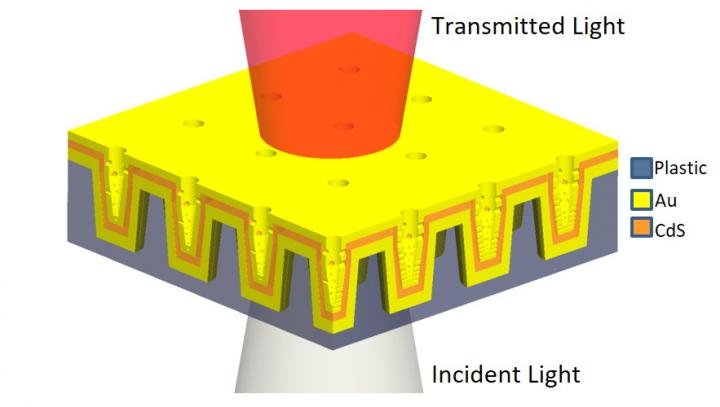 Plasmonics is the study of the interaction between electromagnetic field and free electrons in a metal. Free electrons in the metal can be excited by the electric component of light to have collective oscillations.

"By combining plasmonic properties and the optical cavity properties together in one device we are able to detect lower concentrations of biomarkers by light confinement and transmission in the cavity layer and from the top of the device respectively, based on the thickness of the multilayers and the refractive index of the cavity layer," Ameen explained.

"The nanocup array provides extraordinary optical transmission. If you take a thin metal film and try to shine light through it, there will be almost no light transmitted. However if you put a periodic array of nanoholes, or in our case a nanocup structure, then what you see is a resonance condition where at a certain wavelength, you will have a peak in the transmission through this device," Ameen concluded.

The light source cable of the required light confinement and transmission is a surprisingly simple one: a simple LED source can do the job.

"Because of our multi-layer high-performing plasmonic structure, we were able to very efficiently scatter out the light to the far field," Hackett said. "When you increase the refractive index of the sensing region, it causes the stored energy to couple out. Usually when you have these types of refractometric plasmonic sensors, you have a shift in the angle or a change in your wavelength when the resonance condition is met. In our case, because we have incorporated a nanocavity, we have a fixed resonance wavelength."

Nowadays, the detection methods for cancer biomarkers in use are implemented only to high-risk patients because it takes time, specialized equipment and significant labor. Not to mention it is a very expensive process.

This method, developed by these researchers, is portable and inexpensive, and it is easily administered to any patient. “This would allow those with an elevated concentration of CEA to be treated even before cancer cells spread in the body,” explains Ameen.

"Right now cancer is detected closer to end stage," Ameen noted, "we want to detect it as early as possible. Our device is providing us with that opportunity."

The results of the research was published on March 29, 2017 in the Advanced Optical Materials journal. A full abstract can be found here.