Membrane to Bridge Gap in the Hydrogen Economy 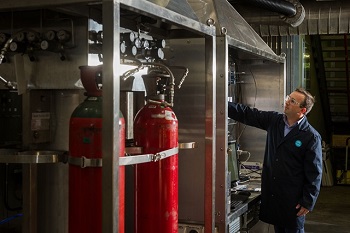 The technology will allow hydrogen to be transported in the form of ammonia and reconverted back to hydrogen at the point of use. Image credit: CSIROmembrane that helps convert ammonia into high-purity hydrogen for fuel-cell powered vehicles.

The two-year project seeks to enable CSIRO's membrane reactor technology to fill the gap between hydrogen production, distribution and delivery in the form of a modular unit that can be used at, or near, a refueling station.

Hydrogen transport and storage is complex and relatively expensive, making export commercially challenging. The membrane system will allow hydrogen to be transported in the form of ammonia and then reconverted back to hydrogen at the point of use.

The membrane is designed to allow the smaller hydrogen molecules through while blocking the larger nitrogen molecules. This way, by passing a pressurized stream of a hydrogen/ammonia mix past the membrane, the output is purified hydrogen.

While Australia is a relatively small hydrogen market, the fuel can be distributed to emerging markets in Japan, South Korea and Europe using existing infrastructure.

By posting a comment you confirm that you have read and accept our Posting Rules and Terms of Use.
Advertisement
RELATED ARTICLES
Imitating Nature to Produce Ammonia
New Way of Producing Hydrogen Fuel Discovered
Electrochemical Compressor Supports the FCEV Market
Cell Uses Sunlight to Produce Electricity and Hydrogen
Proving the Potential of Rechargeable Proton Batteries
Advertisement