According to data from the U.S. Bureau of Labor Statistics (BLS), wind turbine service technician is the fastest growing occupation in the United States. According to the BLS, wind turbine service technicians install, maintain and repair wind turbines. The position has an average salary of around $52,000 per year and is expected to grow 108% between 2014 and 2024. The next-highest position, occupation therapy assistant, has a projected growth rate of 42.7 percent. 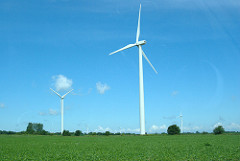 Credit: Patrick Finnegan / CC BY 2.0Of all U.S. renewable energy sources, wind power has experienced the steadiest growth. According to data from the Energy Information Administration (EIA), wind power supply has grown from 0.264 quadrillion BTUs in 2006 to 2.152 quadrillion BTUs in 2016, an increase of over 800%. The wind power industry has followed suit with impressive job growth. The ninth edition of the American Wind Energy Association (AWEA), released on April 19, reported that the U.S. wind power industry surpassed 100,000 jobs in 2016. The report also noted that the industry added jobs nine times faster than the U.S. economy as a whole.

Wind power accounts for a little over 20 percent of the U.S. renewables mix, according to 2016 EIA data, and total installed wind capacity topped 82,000 MW at the end of 2016. Most wind power development has occurred in the midwestern and southern parts of the country. Texas leads the country by far with 20,321 MW of installed capacity as of 2016.

By posting a comment you confirm that you have read and accept our Posting Rules and Terms of Use.
Advertisement
RELATED ARTICLES
These Four States Rely the Most on Wind Energy
Favorable Market Drives U.S. Wind Power Market, for Now
Wind repowering project gets under way with new turbines and towers
AWEA Touts Job Growth in Annual Wind Report
DOE Report: U.S. Wind Sector Soared in 2016
Advertisement