The latter venture envisions a network of tunnels under Los Angeles so cars can avoid traffic congestion. Musk introduced a video showing how an electric car-skate attached to an elevator from street level that brings cars vertically underground into a tunnel. There’s no speed limit in the tunnel — and the car-skates are being designed to achieve speeds of 200 km/h (130 mph).

“You should be able to get from Westwood to LAX [the airport serving the greater Los Angeles area] in 5-6 minutes,” Musk said.

A boring machine recently showed up at SpaceX headquarters near Los Angeles where it will soon begin to bore some test tunnels. 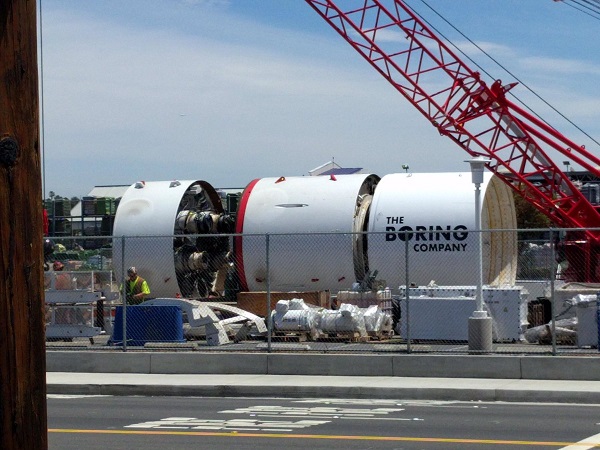 Musk says the Hyperloop test track is the second biggest vacuum chamber in the world, smaller only than the Large Hadron Collider. The proposed transportation system would propel people and freight in pod-like vehicles in a vacuum, and tunnels end up being great for creating vacuum.

“We’re cautiously optimistic that it’ll be faster than the world’s fastest bullet train, even over a .8-mile stretch,” Musk said of Hyperloop.

Musk also mused about the success of the Falcon 9, the two-stage rocket designed and manufactured by SpaceX. The rocket has posted nine successful launches and landings, and earlier this year a used rocket completed a second successful mission and landing for the first time in history.

“It’s the first reflight of an old booster where that reflight is relevant,” Musk said. “Reusability is only relevant if it is rapid and complete, like an aircraft or a car … You don’t send your aircraft into Boeing in between flights.”

Mars is also on the entrepreneur’s radar; he revealed plans for a rocket the size of a 40-story building.

“The thrust level for this configuration is about four times the thrust of a Saturn V moon rocket,” the biggest rocket humanity has ever created, he said. “In units of 747s, this would be the thrust equivalent of 120 747s with all engines blazing.”

The rocket is so massive that it could take a fully-loaded 747 as cargo. While it may seem large now, “future spacecraft will make this look like a rowboat,” Musk said. He expects the SpaceX Interplanetary Transport System to be built in 8-10 years.

Expect the Tesla Model 3 to arrive in July with an autopilot feature. Using only passive optical cameras and GPS – no LIDAR – the Model 3 will be capable of autonomous driving. “Once you solve cameras for vision, autonomy is solved; if you don’t solve vision, it’s not solved … You can absolutely be superhuman with just cameras.”

Musk says that Tesla is on track for completing a fully autonomous, cross-country LA to New York trip by the end of 2017.

“November or December of this year, we should be able to go from a parking lot in California to a parking lot in New York, no controls touched at any point during the entire journey,” Musk said.

“With the Tesla Semi, we want to show that an electric truck actually can out-torque any diesel semi. If you had a tug of war competition, the Tesla Semi will tug the diesel semi uphill,” Musk said.

And it’s nimble — it can be driven around “like a sports car,” he says.

His motivation? “There have to be reasons that you get up in the morning and you want to live. Why do you want to live? What’s the point? What inspires you? What do you love about the future? If the future does not include being out there among the stars and being a multi-planet species, I find that incredibly depressing."

“The value of beauty and inspiration is very much underrated, no question,” he said, “But I want to be clear: I’m not trying to be anyone’s savior. I’m just trying to think about the future and not be sad.”