Engineers at Oxfordshire, UK-based Tokamak Energy report the achievement of first plasma in a small prototype controlled fusion reactor. The ST40 reactor is expected to produce a record-breaking plasma temperature of 100 million degrees C by 2018 for a privately-funded venture. This is seven times hotter than the center of the Sun and the temperature necessary for controlled fusion. 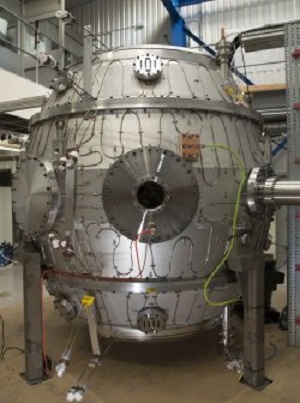 The next steps in advancing compact spherical tokamak technology are to complete the commissioning and installation of the full set of magnetic coils that are crucial to reaching the temperatures required for fusion. This will allow the ST40 to produce a plasma temperature of 15 million degrees C—as hot as the center of the Sun—later in 2017.

The final phases for the project envision achieving energy breakeven conditions by 2020, where at least as much energy is produced by the machine as is input to drive fusion reactions, and realizing commercially viable fusion power by 2030.

Dr. David Kingham, CEO of Tokamak Energy, commented: “Today is an important day for fusion energy development in the UK, and the world. We are unveiling the first world-class controlled fusion device to have been designed, built and operated by a private venture. The ST40 is a machine that will show fusion temperatures—100 million degrees C—are possible in compact, cost-effective reactors. This will allow fusion power to be achieved in years, not decades.”

Re: Video: First Plasma for Compact Tokamak in UK
#1

This group is not the only one with a key vision to reducing the time of positive power balance from decades to years. LLL in California is not the least of which.