A sensor-laden glove was designed at the University of California (San Diego) as a reliable tool for assessing muscle stiffness, or spasticity, in cerebral palsy, stroke and multiple sclerosis patients.

Spasticity is typically evaluated using a six-point rating scale called the Modified Ashworth Scale. This scale is the current hospital standard, but it is subjective and often yields ratings that vary from one doctor to another. These ratings help dictate the dose of medication patients are prescribed to manage their spasticity. Inconsistent and inaccurate ratings can either lead to dangerous overdose or ineffective treatment as a result of doses that are too low.

The new device, built on a regular sports glove that a doctor can wear while holding and moving a patient’s limb back and forth, is engineered to provide objective assessments of muscle stiffness. More than 300 pressure sensors taped onto the palm measure the amount of force required to move a patient’s limb. A motion sensor taped on the back measures how fast the limb is being moved. 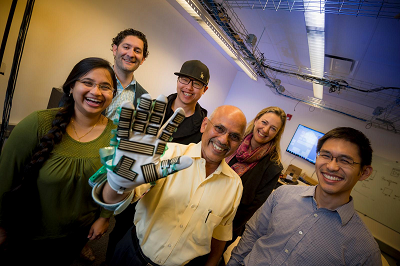 Data from the glove's sensors are transmitted to a computer and analyzed. (Credit: Erik Jepsen/UC San Diego Publications)

Data from all the sensors are transmitted to a computer, where they are integrated, processed and mapped in real-time using advanced signal processing algorithms. A numerical reading calculates the actual power required to move a patient’s limb—the more power needed, the more severe the patient’s spasticity.

A robotic “mock patient” constructed to serve as a control to validate research results consists of an artificial arm that can be moved to simulate the flexing motion of an actual patient’s arm. The arm is connected to a rotating disc that can be manually adjusted to different resistance levels, like bike gears. Embedded sensors measure the power needed to overcome the resistance and get it moving. Researchers can set the resistance, determine the amount of power required to move the arm, and test whether the glove produces a matching result.

In an initial study, two physicians tested the glove on five different patients with cerebral palsy. Each physician wore the glove while performing various movement tasks and provided spasticity ratings according to the Modified Ashworth Scale, without knowing the readings from the glove.

Comparison of results showed that only 27% of the physicians’ spasticity ratings agreed with each other, while 64% of measurements made by the glove agreed with the numbers generated by the mock patient.

Researchers say the technology could potentially be applied in other procedures where doctors have to rely on touch and feel to evaluate a patient's condition: monitoring spine health, assessing the severity of hip dislocation in infants, rehabilitation therapy, physical therapy and more.