Agrivoltaics: How Plants Grown Under Solar Panels Can Benefit Humankind 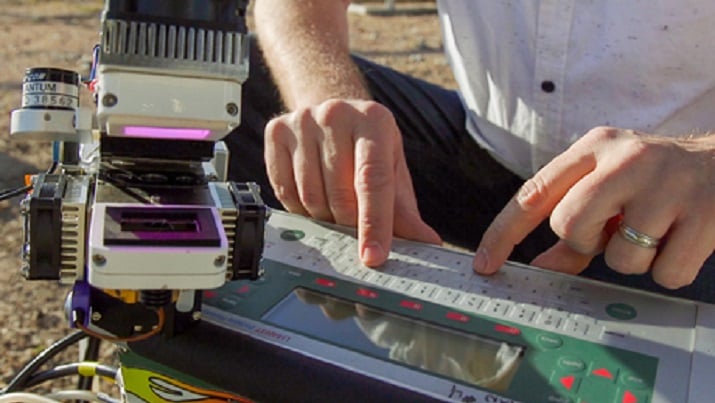 Barron-Gafford calibrates what he refers to as the Mini-Biosphere 2, a field unit that replicates the climate testing and control technology used in the Biosphere 2. Image credit: Bob Demers/UANews

An experiment in co-locating renewable energy with agriculture is being carried out in the Sonoran Desert, just outside of Biosphere 2. Called "agrivoltaics," the project is headed by Greg Barron-Gafford, an assistant professor specializing in biogeography and ecosystem science in the University of Arizona's School of Geography and Development. Barron-Gafford describes the study as a new way of "doing agriculture in the dry lands of the world."

A year and a half ago, Barron-Gafford and his colleagues set out to measure the environmental impact of renewable energy, specifically solar panels. Using a series of instruments to measure and compare air temperature over the canopy of the desert ecosystem to the temperature under a solar array, they discovered that the solar array created a locally warmer environment than normal. Barron-Gafford calls this a "solar heat-island effect," which is similar to the urban heat-island effect seen in metropolitan areas. In the urban landscape, Barron-Gafford points out, "you've transformed the landscape to a built environment and it changes how sun energy moves through the system. It creates a net warming effect, especially at night." 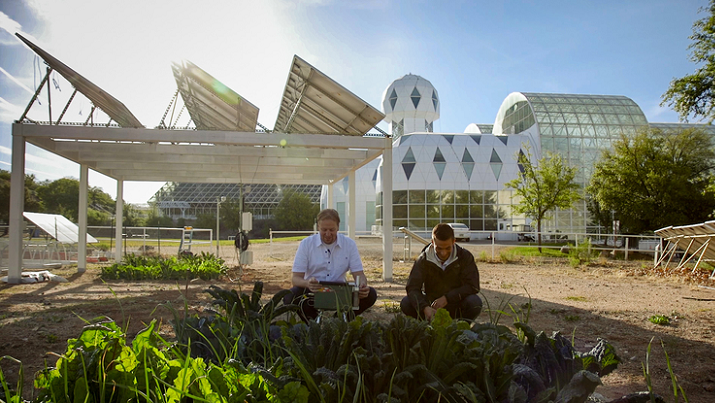 Researcher Greg Barron-Gafford and undergraduate research assistant Dan Blackett tend to the greens at the agrivoltaic test site at Biosphere 2. Image credit: Bob Demers/UANewsIn the case of the temperature shift under the solar array, Barron-Gafford suspected that the effect was being fueled by the absence of plants. In a normal environment, a mix of plants and soil allows for air to circulate unencumbered. Plants also take up carbon for photosynthesis by opening up their pores, while letting water escape from their leaves—Barron-Gafford refers to the plants as "little evaporative coolers on the landscape."

"Think about it," he says. "If you get rid of all the plants when you put in renewable energy, you've gotten rid of that cooling potential, and you get a warmer environment. We wanted to see if you put the cooling effect back into the system, you can actually cool those panels back down and mitigate that heat-island effect."
To test out the theory, Barron-Gafford positioned elevated solar panels over an understory of plants; their growth and appearance are regularly checked and recorded, as is their carbon dioxide uptake and the soil's moisture. The plants cool the solar panels down, allowing them to retain their efficiency; the solar panels, in turn, serve to shade the plants, reducing evaporation of water and allowing for less water to be required to grow the same crops.
"We're co-locating the two and taking the benefits of each, hoping that there's an additive effect," Barron-Gafford says.
Soon to come: Barron-Gafford and his team plan to take the system to rural Arizona and northern Mexico, where there is a lack of reliable water and power.
"This is the ultimate goal of this work," he says. "Reaching into those rural landscape where a simple idea like growing your plants under solar panels can solve some important problems. This work truly is at the nexus of food, energy and water science."
Powered by CR4, the Engineering Community

By posting a comment you confirm that you have read and accept our Posting Rules and Terms of Use.
Re: Agrivoltaics: How Plants Grown Under Solar Panels Can Benefit Humankind
#1

Will it be possible to grow plants 24 x 7 using artificial sunlight, and have accelerated agriculture ?