Built in the U.S.A.: Reagan National Set for $1bn Expansion 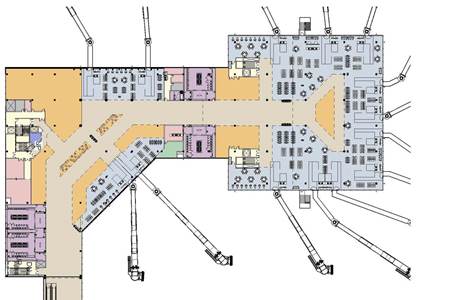 Plan for new commuter terminal at Reagan National Airport. (Editor's note: Investment in critical infrastructure is gaining increased attention at the federal, state, and local levels around the U.S. Engineering360 presents an ongoing series of articles that look at projects, approaches, technologies, and engineering challenges that lie at the heart of this push to modernize existing infrastructure and build for future needs.)

Design has been completed for two new security checkpoints that will be constructed above the Terminal B/C arrivals roadway and connected to National Hall and walkways from the Metrorail subway station and parking garages. The project is estimated to cost $245 million and could be completed in 2020. In essence, the project will move security screening out of the main terminal.

Once opened, the new checkpoints will expand capacity from 20 to 28 security lanes, expediting the screening process between Terminal B/C airline concourses and the new commuter concourse. The resulting connectivity is designed to ease gate area congestion and expand access to shopping and food.

One of the most recent improvements at the airport was the 1997 opening of the 1 million square foot North Terminal, designed by Pelli Clarke Pelli Architects. The focus of the terminal is a long steel-​and-​glass concourse formed from two rows of square bays topped by shallow domes. The terminal houses 35 aircraft gates, shops and food outlets, along with 100 ticket counters, 12 baggage claims, three piers where airline gates are located, and a connection to Terminal A.

Reagan National is not the only Eastern Seaboard airport that is getting an update. LaGuardia Airport in New York City in in the midst of a $4 billion project to transform the dated and cramped airport into a single, structurally unified main terminal with expanded transportation access, increased taxiway space, and passenger amenities.

In October 2016 pile driving got under way to begin constructing the foundation for the new Terminal B. That followed a June groundbreaking that featured New York Governor Andrew Cuomo and Vice President Joe Biden. Construction began on the new 1.3 million square foot 35-gate terminal, along with a new West Parking Garage and other supporting facilities.

LaGuardia’s current terminal layout, comprised of multiple terminals, will be replaced by one main, architecturally unified terminal. This will be accomplished by demolishing the existing Terminal B building, which is operated by the Port Authority, and replacing it with a larger structure. This structure will be located closer to the Grand Central Parkway. The new terminal will include a new Central Arrivals and Departures Hall and will link to Delta’s Terminals C and D.

Meanwhile, the Dallas/Fort Worth Airport in Texas faces $5 billion to $10 billion in new capital infrastructure projects that could include runways, taxiways and other parts of the airfield. The airport opened in 1974 and handles around 1,800 flights a day. Airport executives know that concrete and pavement are reaching the end of their expected lifespan.

The Airports Council International says U.S. airports have close to $100 billion in infrastructure projects scheduled for the next five years.