Autonomous Trucking Gears Up for the Long Haul

In the 1977 film “Smokey and the Bandit,” Burt Reynolds’ character is hired to deliver 400 cases of beer from Texas to Georgia with the sheriff hot on his trail.

Four decades later, in October 2016, a self-driving truck hauled 50,000 cans of Budweiser beer on the highway between Fort Collins, Colo., and Colorado Springs with no interruption.

Instead of the Bandit outmaneuvering everyone who got in his way, the autonomous delivery was much less eventful — and certainly more legal. The truck’s operator monitored the 120-mile journey through Colorado from the comfort of the sleeper berth as lidar, radar, and a camera did all the work. 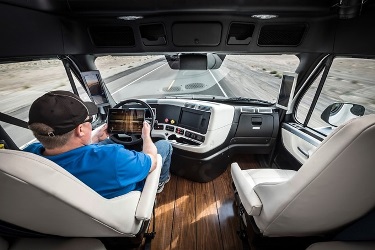 A Level 3 autonomous system requires a driver who can take manual control of the vehicle when prompted. Image: Daimler Trucks North AmericaThe collaboration between Anheuser-Busch and Otto, the self-driving tech subsidiary of Uber, marked one of the first commercial uses of autonomous trucking in the U.S. Other truck makers and tech companies have been testing automated rigs in real-world conditions over the last few years as the industry navigates a path toward safer, more efficient trucking.

In an age when two-day shipping is the exception rather than the norm, retailers are looking for ways to deliver goods to consumers faster, cheaper, and better. They’re keeping the trucking industry busy, as more then 3.4 million commercial heavy-duty trucks transport 10.5-billion tons of goods annually on U.S. highways and interstates. Moving that much cargo takes 38 billion gallons of diesel fuel.

Over the next decade, the amount of freight moved by trucks is expected to grow 27%. Automating long-haul trucking promises gains in efficiency and safety — factors advantageous not only for the supply chain depending on lean over the road operation but the 210 million American drivers sharing the motorways.

The National Highway Traffic Safety Administration (NHTSA) attributes 94% of highway accidents to human choice or error. Approximately 3,800, or 9.5%, of highway deaths occur in a crash involving a large truck. Autonomous systems aim to mitigate or prevent the majority of accidents tied to human behavior through technology that corrects for these mistakes or has full driving responsibility.

Furthermore, internal studies conducted by Daimler have shown that relieving the operator from the “monotonous and fatiguing task” of driving a truck, even temporarily, can leave the driver feeling more refreshed and less drowsy. Federal regulations mandate that truckers take a break after driving 11 hours at a stretch. Semi-autonomous systems that depend on the presence, but not the full attention, of a vehicle operator could potentially alter that regulation.

As the number of traffic accidents decreases, so, too, will congestion caused by those crashes. 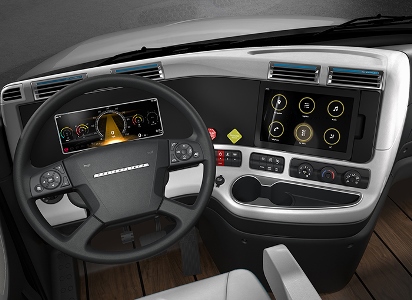 A driver can monitor operations through an easy-to-use human-machine interface. Image: Daimler Trucks North AmericaAutomating truck driving also could address the industry’s driver shortage, which reached 48,000 in 2015 as more drivers retire and fewer recruits replace them. That shortage is expected to climb.

“Technology including safety systems, autonomous systems and connectivity would make trucks and truck driving as a profession more attractive to the next generation of drivers,” Rotz says.

The transition to the next generation of drivers should be smooth, since trucks use the same sensor technology — cameras, lidar and radar — underpinning their passenger vehicle counterparts. Adjustments to an autonomous car’s algorithms accommodate differences in vehicle dynamics in trucks.

“A truck’s dynamic response varies based on driving conditions such as pulling fully loaded trailer, an unloaded trailer or no trailer at all,” Rotz says.

NHTSA’s Federal Automated Vehicles Policy, released in September 2016, guides manufacturers in the development, testing and deployment of highly automated vehicles. The policy adopts SAE International’s standard J3016, which defines six levels of driving automation. In May 2015, Daimler Trucks North America introduced the first licensed autonomous commercial truck to operate on an open public highway in the United States. The Freightliner Inspiration Truck features Highway Pilot, an SAE Level 3 system that can take over control of the driving function, including steering, accelerating, and braking.

Automated platooning reduces fuel emissions by 7%. Image: Peloton TechnologyDaimler Trucks’ automated system operates similarly to cruise control in that it is designed to stay in its lane and maintain a safe following distance to the vehicle in front. If the vehicle ahead brakes or another vehicle cuts in from a neighboring lane, the autonomous system will brake accordingly to give way. Lane change maneuvers, overtaking other vehicle or exiting the highway are still performed manually.

In a Level 3 autonomous system, the vehicle requires a driver who can take manual control of the vehicle when prompted by the system. “Effective concepts for human machine interaction are also a critical aspect to the design, particularly with respect to handing control back to the driver,” Rotz says.

An escalation scheme comprising a visual, audible, and haptic feedback mechanism can alert the driver to overtake control involving a countdown sequence. The countdown timer is still under evaluation, according to Rotz, but is based on two parts: suitable reaction time for the driver, and the distance the radars (250 m) and cameras (100 m) see ahead.

In the case of the beer delivery truck from Otto, the technology offers Level 4 high automation. the automated driving system is responsible for all driving decisions, even if a human driver t doesn’t respond to a request to intervene. Otto’s hardware kits can be installed on most existing trucks; the company converted a Volvo 780 for trip in Colorado.

Volvo Trucks has its own plans for autonomous driving, which they’re taking underground. Volvo’s fully autonomous FMX truck, part of a development project, is operating 1,320 meters below the earth’s surface in a mine in northern Sweden. The vehicle continuously monitors its surroundings to avoid fixed and moving obstacles as it navigates rough terrain within narrow tunnels. an on-board transport system simultaneously gathers data to coordinate the route and fuel consumption. 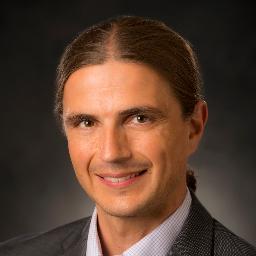 A wireless communications link between the trucks’ active safety systems allows the vehicles to coordinate their speeds and maintain a close following distance that reduces aerodynamic drag.

Peloton’s system orders pairs of trucks by weight and braking ability to determine their optimal following distance, typically between 36 and 80 feet. The North American Council for Freight Efficiency has validated fuel savings of 7%.

As trucking and tech companies demonstrate their automated capabilities, many acknowledge they are years away from a fully autonomous truck production. “The biggest challenge is to design a system that responds to a large number of use cases or driving situations the vehicle will encounter on a wide variety of roads,” Daimler’s Rotz says.

While sensors are earning high marks for detecting their surroundings, some software packages still lack the power necessary to analyze the data and make quick decisions. And even with those high-performing sensors, inclement weather can spell trouble for semis and passenger vehicles alike. A big rig on a snowy interstate could kick up slush that blocks the camera’s view on a self-driving car. Or that truck could have difficulty automatically correcting its course when it hits a wet patch of road.

That’s why, at least in the near future, a driver will need to be on board. Peloton’s driver-assistive system, scheduled to launch commercially in 2017, connects trucks to a cloud-based operations center that continuously manages platoons and limits them to appropriate road, weather and traffic conditions.

Meanwhile, DTNA’s system has a built-in safeguard to handle poor weather and other less than ideal conditions, such as faded lane markings. As soon as the truck starts, the camera continually monitors road conditions.

Beyond the technical limitations, regulations are the biggest thorn in the autonomous driving industry’s side. Some states have clearly documented rules for autonomous driving, while others have none. In the first two months of 2017 alone, 20 states reportedly introduced 48 bills on self-driving vehicles.

Executives from Volvo, Toyota, General Motors, and Lyft have pressed U.S. legislators to prohibit states from establishing a patchwork of autonomous vehicle rules that contradict each other. For example, some locations require from commercial trucks a minimum following distance of 100-500 feet, which may take platooning off the table.

Despite the challenges confronting the industry, autonomous trucks will likely be in regular operation before self-driving cars. That’s because driving conditions on highways and freeways are relatively well controlled, predictable and less complex than city streets.

“Lanes are typically well marked, access is generally not allowed for pedestrians or bicyclists, intersections are rare and there are seldom traffic signals, all of which make automating the driving task easier,” says Daimler’s Rotz.