Researchers in the Cockrell School of Engineering at the University of Texas (UT) at Austin have developed a treatment for hemophilia that can be administered via a biodegradable capsule.

The researchers designed an oral delivery system containing micro- and nanoparticles to carry a protein therapy that treats hemophilia B, which is caused by a missing or defective clotting protein known as factor IX. The advance gives those affected by the hereditary bleeding disorder hope for a less-expensive, less-painful treatment option than conventional injections or infusions. 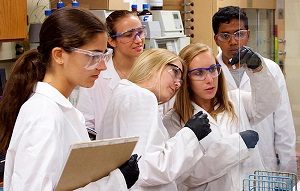 Sarena Horava (holding vial), a recent PhD graduate from the Cockrell School of Engineering, works with high school students in the lab. Image credit: Cockrell School of Engineering. “While an oral delivery platform will be beneficial to all hemophilia B patients, patients in developing countries will benefit the most,” says study co-author Sarena Horava, a recent PhD graduate who now works at Triton Systems. “In many developing countries, the median life expectancy for hemophilia patients is 11 years due to the lack of access to treatment. But our new oral delivery of factor IX can now overcome these issues and improve the worldwide use of this therapy.”

Horava collaborated with Nicholas Peppas, director of UT Austin’s Institute for Biomaterials, Drug Delivery and Regenerative Medicine, on the research. Their work builds upon their previously patented system for the oral delivery of human factor IX (hFIX), a prophylactic treatment for hemophilia B patients that overcame the biggest challenge in delivering hFIX—its extreme instability in the body’s various pH environments.

The researchers’ new system is designed to capitalize on the body’s pH and changes in enzymes inside the gastrointestinal tract for a smooth delivery. As it moves through the body, the particle-containing capsule resists the major gastric enzyme to remain intact while in the stomach, providing protection for the encapsulated drug. In the small intestine, the capsule begins to swell with the increase in pH and is then degraded by the major intestinal enzyme, slowly releasing the drug over time.

“Based on the current capabilities of this system, approximately two capsules would be equivalent to one injection,” Horava says. “However, we anticipate that we will make further improvements to the delivery capacity of the oral delivery system and therefore decrease the capsule amount.”

The researchers plan to further test the system before clinical trials, with the ultimate goal of positioning the technology for U.S. Food and Drug Administration approval.

By posting a comment you confirm that you have read and accept our Posting Rules and Terms of Use.
Advertisement
RELATED ARTICLES
Gum-chewing robot helps expedite analysis of oral drug delivery gum
Custom meds could be possible thanks to 3D printing
Micro-Needle Patch Could Potentially Reduce Weight by 30 Percent
'Micro-subs' precisely deliver drugs throughout the human body
Obstructive Sleep Apnea: Traditional and Alternative Treatment Therapies
Advertisement