In the drive toward ever smaller medical devices, one of the keys to manufacturing success is a specialty known as micromolding.

While there are a number of difference definitions of micromolding, the term has traditionally been applied to injection molding of parts weighing less than a gram. It can also refer to molding of parts with “micro” features measured in thousandths of an inch, with tolerances down to a few microns.

When it comes to medical devices, smaller is better for a number of reasons. For one thing, smaller devices can make surgery less invasive.

“In many cases, the smaller a device can be made, the less trauma for the person being operated on and the quicker the recovery,” says Dennis Tully, president of MTD Micro Molding, Charlton, Mass., which focuses on molding small parts for the medical device industry.

Shrinking medical devices can also increase patient comfort—think, for example, of smaller and lighter versions of insulin pumps and other wearable devices. In addition, smaller medical components allow more functions to be packed into small devices such as hearing aids, says Aaron Johnson, vice president of marketing and customer strategy at Accumold, a micromolding firm based in Ankeny, Iowa.

In one sense, the micromolding process can be thought of as a scaled-down version of conventional molding. Similarities include the use of a molding press for both processes.

But there’s more to successful micromolding than simply buying one of the many micromolding presses on the market today, says Johnson.

“You can buy a Steinway [piano], but if you don’t have the virtuoso to go with it, it’s just a nice piece of furniture,” he says. “Micromolding also requires the virtuoso.” 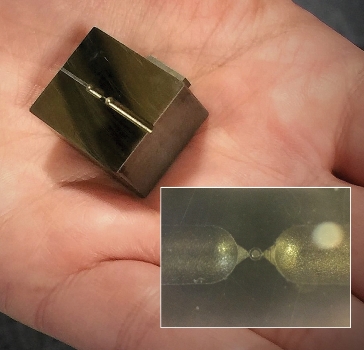 The small dot between the lines is a one-cavity mold used to make an ophthalmic part. Even at 100X magnification, the part itself, shown in the inset, is barely visible. Credit: MTD Micro MoldingJohnson believes micromolding virtuosity requires special skill in areas such as material selection and building the metal tools used to mold tiny plastic parts. The latter, he says, “takes experience and an artistry that is more sophisticated, in our opinion, when you are talking about tolerances of a couple of microns versus hundreds of thousandths of an inch.”

Among the smallest medical parts Accumold makes is a 1-mm-diameter aspheric lens for an endoscope used for imaging inside the heart. Requirements for the polycarbonate camera lens include tolerances within a few microns, as well as optical clarity and surface finish. Molding of small optical parts and features “adds a whole new complexity layer” to the micromolding process, Johnson says.

At MTD, one of the smallest parts being molded is what Tully calls a drug delivery “cup,” basically a washer with a hole in the center where a drug can be stored. The OD of this polypropylene cup is 0.012 in., “about one-third the diameter of the decimal point on my calculator,” Tully says. “You really can’t even see the part with the naked eye.”

Another medical part created by MTD is a bioabsorbable polymer fixation tack used with a mesh in hernia repair surgery. After it’s molded, the polymer tack must be unscrewed from a steel core with a minor diameter measuring 0.030 in.

MTD works with materials ranging from polypropylene and polyethylene at the low end of the properties spectrum all the way up to polyether ether ketone. Strong and chemical-resistant, PEEK is the choice for many medical applications because it meets all requirements for use in the body, Tully says.

When choosing a material for micromolding, a consideration is whether the material will flow the distances necessary to fill thin-wall mold features.

Polypropylene is one of the easier-flowing materials, making it a good choice for long, thin walls from a process standpoint. But it doesn’t offer much in the way of mechanical properties, which usually eliminates it from consideration for parts MTD molds. 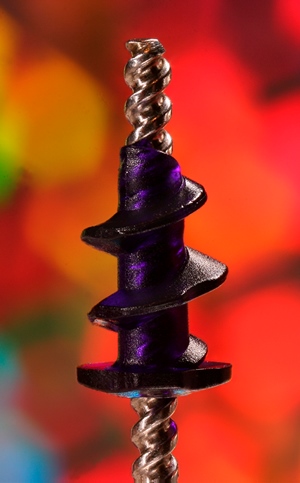 This bioabsorbable polymer fixation tack is used with a mesh in hernia repair surgery. It was made using what MTD Micro Molding describes as the world’s smallest bioabsorbable unscrewing mold. Credit: MTD Micro MoldingPEEK, on the other hand, offers excellent mechanical properties, but “it is one of the more demanding materials to process,” Tully says. “So we would only suggest it if it’s absolutely necessary.”

From among the many micromolding challenges PEEK presents, Tully singles out the difficulty of getting it to flow into thin wall features, as well as the high mold temperatures it requires, which complicate efforts to handle tiny parts during the manufacturing process.

Johnson calls part handling one of the “hidden” micromolding challenges.

“Everybody would love to just shoot [micro parts] into a bag, lick a stamp and send them,” he says. “But they usually need to be handled with care and often packaged in a specific way that helps our customers handle them in a high-volume manufacturing system.”

Proper orientation and packaging of parts measured in microns might require the creation of what Johnson calls a “micro robotic cell,” which Accumold builds using robots, cameras, sensors and other off-the-shelf components.

Another under-the-radar micromolding challenge cited by Johnson is metrology.

“When you are talking about a tolerance of a couple of microns, how you measure it makes all the difference in the world,” he says. So Accumold dispatches quality engineers to customers’ facilities to make sure that “the way we measure it is the way they measure it.” Keys in this regard include the use of common datum points, fixturing, and metrology systems.

According to Tully, MTD is one of a handful of U.S. firms with an in-house Sarix 3D micro EDM milling machine, which can create very sharp corners in steel. The machine produces results similar to those achieved by milling, but instead uses a non-contact EDM process that works at a scale smaller than the limit of conventional milling.

MTD claims the micro EDM system can produce corners with radii of 0.0002 in. and a tolerance resolution of 0.000004 in., along with glass-like surface finishes. On the downside, however, the metal removal rate is “painfully slow,” Tully says.

How slow? EDM is 10 times slower than traditional milling, and the micro EDM machine is 100 times slower than that. This means it can take the machine three weeks running 24/7 to finish a single mold cavity. So MTD only uses it when corner radii must be less than 0.003 in. in diameter, generally considered the limit of normal EDM processes.

Another new tool at the MTD facility is a machine that uses ultrasonic energy to deliver melted material into a mold cavity. This vibrational energy is supposed to allow flow into very thin areas for longer distances than can normally be achieved in micromolding processes. As a result, it’s possible that thin wall features could be lengthened by a factor of 10, says Tully.

Though MTD was one of the first U.S. companies to acquire an ultrasonic molding machine, it has yet to use the machine in production.

“We’re still trying to get comfortable with what it can do and develop a database on how well it works with different materials,” Tully says.

It’s part of the effort by MTD and other firms like it to surmount molding difficulties that grow larger as plastic medical parts get smaller.

By posting a comment you confirm that you have read and accept our Posting Rules and Terms of Use.
Advertisement
RELATED ARTICLES
Plastic injection molding
A Revolution in Tooling Qualifications
Proto Labs Now Offers Rapid Insert Molding
Machining vs Molding: Which is Better for Fabricating Plastic Parts?
Technique Is Developed to Shape, Surface-treat Plastic Parts
Advertisement