Nikola Motor Company has unveiled a hydrogen-electric Class 8 semi-truck that it says will enter production by 2020.

The Nikola One commercial truck utilizes a fully electric drivetrain powered by high-density lithium batteries. Energy will be supplied by a hydrogen fuel cell that will give the truck a range of 800-1,200 miles while delivering over 1,000 horsepower and 2,000 foot-pounds of torque. 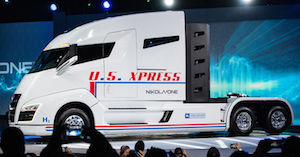 The Nikola One at its launch in early December. Image credit: Nikola Motor Company.According to the company, which is based in Salt Lake City, Utah, the Nikola One offers a number of advantages over comparable diesel-powered trucks, including greater horsepower, torque, range and acceleration and reduced weight. By removing the diesel engine, transmission and emissions equipment and installing batteries, electric motors and a fuel cell below the frame rail, Nikola says the truck also has a lower center of gravity than other semi-trucks—making for better handling and safer driving.

The truck's leasing program will include unlimited hydrogen fuel, warranty and scheduled maintenance during a 72-month term. To date, the company says it has accepted reservations totaling nearly $3 billion in future orders.

Nikola Founder and CEO Trevor Milton says the company is currently in discussions with several states on locating a manufacturing facility to build the truck, which will be determined in the first half of 2017. He further says Nikola will begin construction in January 2018 of a network of hydrogen fueling stations across the U.S. and Canada.

According to the company, it is in the process of developing multiple 100-megawatt solar farms to create hydrogen from electrolysis. Solar energy is to be converted to hydrogen on-site and then transported to service stations by a fleet of Nikola zero-emission hydrogen-electric trucks. The hydrogen will be stored at Nikola stations in liquid form and dispensed into vehicles as compressed or liquid hydrogen.

By posting a comment you confirm that you have read and accept our Posting Rules and Terms of Use.
Re: Hydrogen-Electric Semi-Truck to Enter Production
#1

I keep having fantasies of a "solar" semi where the entire truck train is covered with solar cells. It would only work in the daytime but it would work great in places like Australia where they run triple trailers and have lots of sun.