Scientists have developed a new way to determine the rate at which nitrate pollution will make its way from groundwater into streams.

Nitrate pollution, primarily from fertilizer runoff, is one of the major freshwater contaminants in the United States. Moreover, the pollution pervades aquifers, and thus groundwater, which feeds into streams over a period of years or decades. 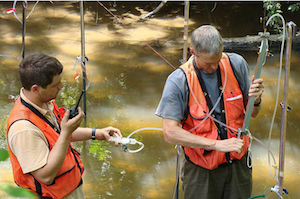 Troy Gilmore (l) and David Genereux sample groundwater beneath West Bear Creek near Goldsboro, North Carolina. Image credit: David Genereux.Measuring the rate of movement, or flux, of nitrate from groundwater into streams is critical to understanding how this pollutant moves through the environment and to assessing the effectiveness of water quality management. However, nitrate flux has traditionally been difficult to gauge and, since there is no standard method for doing so, it is rarely measured.

David Genereux, professor of hydrogeology at North Carolina State University, and Troy Gilmore, assistant professor of biological systems engineering at the University of Nebraska, wanted to determine if there is a reliable way to measure the flux. They developed a new form of aquifer analysis that uses field sampling results to estimate the rate at which nitrate contamination will be flushed from an aquifer into streams in the coming decades.

Genereux, Gilmore and the team focused on West Bear Creek, a tributary of the Neuse River near Goldsboro, North Carolina. By age-dating the groundwater using tracers, and measuring the concentrations of nitrate and the rate of groundwater flow upward through the streambed, they were able to calculate the rate of change of pollutant nitrate mass in the aquifer, the current nitrate flux out of the aquifer and into the stream and future values of this flux over the next few decades.

“Our new approach captures in a few days of field sampling what might otherwise require many years of long-term monitoring or a complex numerical computer model of hydrology and water quality,” Gilmore says. “And the results have caught the attention of water resources managers and regulators in both North Carolina and Nebraska.”

“Even though nitrate input to the water table aquifer we studied has been dropping for 15 to 20 years, nitrate output from the aquifer to West Bear Creek may hold steady or even increase for 10 years or more before starting to drop because of the long lag time in the response of aquifer output to streams,” says Genereux. “Hopefully hydrologists will be able to utilize our new method to assess pollutant fluxes and see if pollution management techniques are working long term.”