Researchers from North Carolina State University (NCSU) and the University of Eastern Finland have developed a new technique for tracking water in concrete structures that they say will allow engineers to identify potential issues before they become big problems. 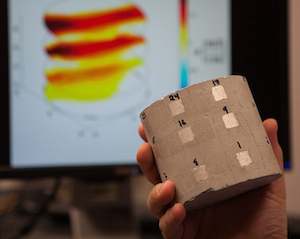 Photograph of one of the cracked samples tested. Image in the background shows the flow of water in the crack. Image credit: Julie Williams Dixon. “We have developed a technology that allows us to identify and track water movement in concrete using a small current of electricity that is faster, safer and less expensive than existing technologies—and is also more accurate when monitoring large samples, such as structures,” says Mohammad Pour-Ghaz, assistant professor of civil, construction and environmental engineering at NCSU and lead investigator on the project. “The technology can not only determine where and whether water is infiltrating concrete, but how fast it is moving, how much water there is and how existing cracks or damage are influencing the movement of the water.”

For their electrical imaging technique, the researchers apply electrodes around the perimeter of a structure. A computer program then runs a small current between two of the electrodes at a time, cycling through a number of possible electrode combinations.

Every time the current runs between two electrodes, a computer monitors and records the electrical potential at all of the electrodes on the structure. The researchers then use their own customized software to compute the changes in conductivity and produce a three-dimensional image of the water in the concrete.

“By rapidly repeating this process—and we can do it even more than once per second—we can also capture the rate, and therefore the volume, of the water flow,” Pour-Ghaz says. “Our electrical imaging approach is something that you could use in the field to examine buildings or bridges, which would be difficult or impossible to do with previous technologies,” he adds.

The researchers have already created and tested a prototype of the system in a lab, accurately capturing images of water flow in concrete samples that are too large to be analyzed using X-rays or neutron radiation. The researchers have also been able to monitor water flow through cracks in concrete, which is more difficult and time consuming when older technologies are used.

Pour-Ghaz says the electrical imaging technology is ready to be commercialized for laboratory use, as well as for scaling-up as an onsite tool to assess structures' integrity.

By posting a comment you confirm that you have read and accept our Posting Rules and Terms of Use.
Advertisement
RELATED ARTICLES
"Sensing Skin" Detects Damage in Structures
Movable Silicon ‘Lenses’ Bring Us One Step Closer to a Neutron Microscope
Researcher Tests Fly Ash for Stronger Concrete
Self-healing concrete promises to fix pipes without human intervention
Rebuilding Damaged Bridges ASAP
Advertisement