"Clever Buoy" Uses Sonar and Software to Warn of Sharks

Australian technology company Shark Mitigation Systems has developed a buoy that uses sonar and identification software to detect sharks and send a warning to beach lifeguards. After being tested earlier this year at Sydney's Bondi Beach, the product is being made available commercially. 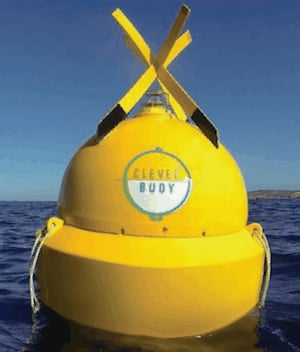 Buoys are deployed beyond the surf zone, and each has a sonar detection range of approximately 60 meters in deep water. Image credit: Shark Mitigation Systems.

Investigation has shown that sharks create a distinctive sonar signature and swimming pattern that are different to mammals. Clever Buoy takes advantage of this by using multibeam sonar transducers that are mounted on the ocean floor, together with custom detection software, to scan for shark-like objects. Once marine life fitting the profile is identified, interrogation software analyzes the object’s swimming pattern to determine whether it is a shark.

As the sonar detects all marine life in the water column, the company says Clever Buoy is capable of detecting any shark within its coverage area, including those that have not been tagged. The technology is non-invasive, and there is no by-catch or impact to marine life from the system.

Buoys are deployed beyond the surf zone, and each has a maximum sonar detection range of approximately 60 meters if deployed in deep water. Shallower water may reduce the range.

As the software continues to learn the details of what it is designed to detect, it is expected to continually develop more sophisticated detection algorithms to allow shark identification by additional characteristics—for example, jaw size and lungs—the company says.

By posting a comment you confirm that you have read and accept our Posting Rules and Terms of Use.
Advertisement
RELATED ARTICLES
Researchers Using eDNA to Detect the Presence of Great White Sharks in Local Waters
Nuclear bombs help conservationists estimate whale shark age
Commercial fishing industry to ward off sharks using electrical signals
DNA Taken from Shark Tooth to Identify Type of Shark Responsible for Biting Two Teens in Waters off Long Island this Summer
The unique construction challenges of building a dolphin exhibit
Advertisement