Engineers at the U.S. Department of Agriculture have engineered a film made of milk protein that’s biodegradable, sustainable, and edible. They say the film is superior to conventional plastic wrap at keeping foods fresh and can also be sprayed onto food, such as breakfast cereal, to keep it from getting soggy in milk.

As milk consumption in the United States has declined, the USDA has been working to create food packaging from leftover milk products. But it wasn’t until recently that researchers came up with a workable formula. 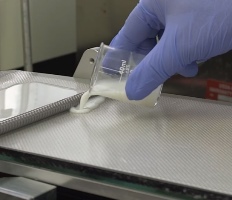 Biodegradable film may keep foods fresher longer than conventional plastic wrap. Source: American Chemical SocietyThe first films made of casein, the milk protein, were effective at blocking oxygen and keeping meats and vegetables fresh, but they were sensitive to moisture and soaked up humidity in the air. That was a problem for a packaging product that’s supposed to keep foods sealed and dry.

Researchers decided to add citrus pectin to the blend. The pectin made the film stronger and more resistant to moisture and high temperatures, although it’s still more sensitive to moisture than plastic.

Still, the new casein-based film is said to be up to 500 times more effective at blocking oxygen than plastic, which keeps foods from oxidizing and going stale, while also slowing the growth of bacteria. Moreover, the formulation can be sprayed directly onto foods.

In addition, nutrients can be added to the casein, creating a potentially healthier alternative to spraying with sugar.

Currently, USDA researchers are testing the film as single-serve food wrap. For instance, as packaging for instant soup or coffee, the food package and its contents could be dropped into hot water where the film would dissolve, eliminating packaging waste.

Although the technology is still in development, the USDA believes with the right industry partners, consumers could see packaging on store shelves in as little as a year.

By posting a comment you confirm that you have read and accept our Posting Rules and Terms of Use.
Advertisement
RELATED ARTICLES
Low-temperature Process Could Add to Milk's Shelf Life
Non-contact sensor indicates milk spoilage without opening container
New Technologies Help Ensure Food That’s Safe to Eat
Researchers Develop "Bumpy" Food Label to Prevent Food Waste
Eco-Friendly Food Packaging is On the Rise: Here's What You Need to Know
Advertisement