Explaining the Origins of Concrete "Creep"

Concrete's tendency to "creep," or deform progressively, under mechanical stress is well known. However, the reasons behind this behavior have generally remained poorly understood and sometimes scientifically contested. 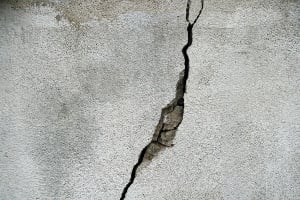 Empirical models often poorly predict concrete creep behavior. Image credit: Pixabay.Sant and colleagues say they believe they have determined the root cause of concrete deformation. “By careful unifications of experimental and computational data, we clarified that creep originates from a dissolution-precipitation process that acts at nanoscale contact regions of [calcium-silicate-hydrates] grains,” he says.

Sant and his colleagues describe their work in The Journal of Chemical Physics. They found that calcium-silicate-hydrates, the binding phase that holds cement paste together, tend to dissolve at high-stress regions and re-precipitate at low-stress regions. The authors say this corresponds with Le Chatelier’s principle, also known as “the equilibrium law.”

Future work will involve putting together a comprehensive description of concrete creep from the atomic to macroscopic scale. This will help them develop mechanistic models for predicting creep behavior and identifying cementation agents with reduced sensitivity to creep.