Titanium-Gold Alloy Is Up to 4x Harder Than Steel

Titanium's hardness can be increased fourfold by the addition of gold, Rice University researchers have found.

“It is [also] about three to four times harder than most steels,” says physicist Emilia Morosan, the lead scientist on a study that describes the properties of a 3-to-1 mixture of titanium and gold with a specific atomic structure that imparts hardness. Moreover, she says, the compound is not difficult to make and is not a new material. 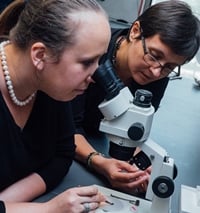 Eteri Svanidze (left) and Emilia Morosan in the laboratory. Image credit: Jeff Fitlow/Rice University. The material’s atoms are tightly packed in a “cubic” crystalline structure that’s often associated with hardness and was previously known. Morosan had previously published a study on titanium-gold, a 1-to-1 ratio compound that is a magnetic material made from nonmagnetic elements. To help identify the compound's composition, purity, crystal structure and other properties, she and fellow researchers tried to grind it into powder for X-ray purposes.

“When we tried to grind up titanium-gold, we couldn’t,” she says. “I even bought a diamond (coated) mortar and pestle, and we still couldn’t grind it up.”

She and former graduate student Eteri Svanidze decided to do follow-up tests to determine how hard the compound was, as well as the hardness of the other compositions of titanium and gold that they had used as comparisons in the original study. One of the extra compounds was a mixture of three parts titanium and one part gold that had been prepared at high temperature.

What the team didn’t know at the time was that making titanium-3 gold at relatively high temperature produces an almost pure crystalline form of the beta version of the alloy—a crystal structure that is four times harder than titanium. At lower temperatures, the atoms tend to arrange in another cubic structure—the alpha form of titanium-3 gold—which is about as hard as regular titanium. It appears that labs that had previously measured the hardness of titanium-3 gold had measured samples that largely consisted of the alpha arrangement of atoms.

Morosan says her group plans to conduct follow-up tests to further investigate the crystal structure of beta titanium-3 gold to see if chemical dopants might improve its hardness even further.

By posting a comment you confirm that you have read and accept our Posting Rules and Terms of Use.
Advertisement
RELATED ARTICLES
Promising Future for New, Implantable Titanium Alloys
Strengthening Titanium Without Sacrificing Its Ductility
Is Diamond Really that Super of a Material? Diamond Materials, Part 1
Fine-Grained Microstructure Could Toughen Coatings
Researchers Develop Stronger Titanium Alloy
Advertisement