The European Southern Observatory (ESO)—a 16-nation intergovernmental research organization for ground-based astronomy—has contracted for the construction of the dome and telescope of the European Extremely Large Telescope (E-ELT). With a main mirror 39 meters in diameter, the E-ELT will be the largest optical/near-infrared telescope in the world when its construction is completed atop a mountain in the northern Chilean Andes in 2024.

The contract—with the ACe Consortium, comprising Astaldi, Cimolai and EIE Group—includes not only an 85-meter-diameter rotating dome with a total mass of 5,000 metric tons, but also the telescope mounting and tube structure, with a total moving mass of more than 3,000 tons. Both of these structures will be by far the largest ever built for an optical/infrared telescope. The dome will rise to almost 80 meters in height and its footprint will be comparable in area to a soccer pitch. 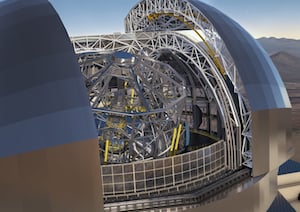 The E-ELT will feature an 85-meter-diameter rotating dome with a total mass of 5,000 metric tons. Image credit: ESO/L. Calçada/ACe Consortium.The E-ELT is being built on Cerro Armazones, a 3,000-meter peak about 20 kilometers from ESO’s Paranal Observatory. The access road and leveling of the summit have already been completed, and work on the dome is expected to start onsite in 2017.

Upon completion, the E-ELT's light-collecting area will be larger than all existing optical research telescopes combined. According to ESO, its adaptive optics system will provide images approximately 15 times sharper than those from the NASA/ESA Hubble Space Telescope at the same wavelength.

"The E-ELT will produce discoveries that we simply cannot imagine today, and it will inspire people around the world to think about science, technology and our place in the universe," says Tim de Zeeuw, ESO’s director general.

Among the E-ELT's primary instruments will be:

· MAORY (Multi-conjugate Adaptive Optics Relay)—an adaptive optics module designed to help compensate for distortions caused by turbulence in the Earth’s atmosphere. MAORY is designed to work with the imaging camera MICADO to provide stable and sharp images across a large field of view in the near-infrared (wavelengths from 0.8–2.4µm) to allow scientists to make precise measurements of the positions, brightness and motions of stars.

As much of this sensitive astronomical instrumentation will be manufactured in Europe—including more than 900 mirrors, most of them hexagonal and extremely vulnerable to changes in temperature and mechanical shock—supply chain logistics will have to be managed as carefully as the engineering of the technologies themselves.

“Transporting such structures over land, sea and partly by air takes very sophisticated operations in itself," notes Håvard Gaustad Harbo, senior management consultant at Ramboll Norway, which has been contracted to oversee shipping of the materials.