When Mom and Pop Met Big Defense: The Roots of Digital Music 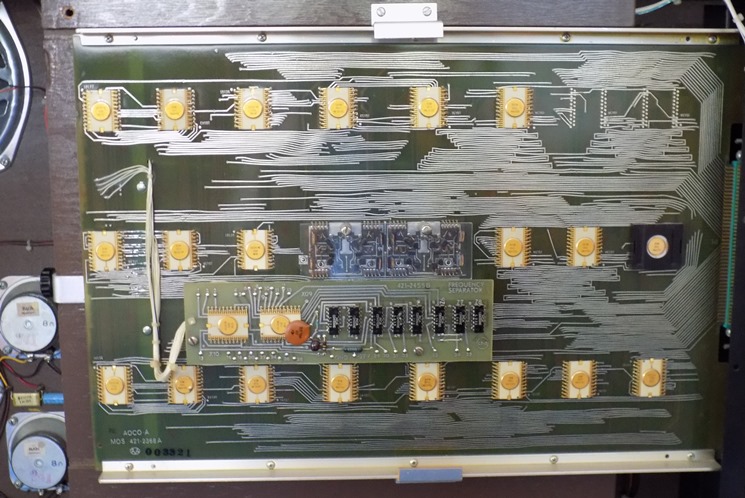 Digital technology revolutionized the way music is recorded, consumed, transported and sold, but its roots can be traced to an unusual and little-remembered partnership from the late 1960s.

Wax, and later vinyl, records had to be played on a machine that needed to remain stationary. A step forward was the development of CDs and cassettes, but these limited listeners to 15 or 20 songs on a single piece of portable hardware. Today, we can carry thousands of pieces of music on a digital player or smartphone. At the same time, digital musical instruments offer performers the ability to access thousands of sounds that can be mixed and managed in a package that fits in a car trunk.

Digital music’s revolutionary roots grew from the partnership between North American Rockwell, the defense manufacturer, and Allen Organ Co., a family-run instrument maker in eastern Pennsylvania. Together, they repurposed aerospace microelectronics to produce the first digital musical instrument and one of the first digital consumer products. In doing so, they realized the brainchild of a musically minded physicist. 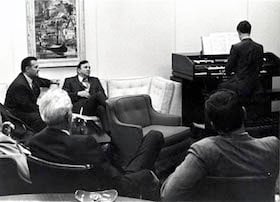 Les Deutsch demonstrates the organ at a Rockwell board of directors meeting. In 1966 Ralph Deutsch, Scientific Advisor to Autonetics and an amateur musician, was shopping for an electronic organ. Deutsch was dismayed at the high cost of quality organs and reasoned that the hundreds of individual oscillators in every instrument—often requiring a separate cabinet for tone generation components—was driving up each instrument’s cost.

He realized that by applying Autonetics’ LSI technology, he could reduce each instrument’s size and cost. Large-scale integration also would allow Deutsch to convert analog organ pipe sounds to digital signals, making the organ sound more like an acoustic instrument.

Deutsch formed his idea into a project and received funding from his business unit. He spent months building a demonstrator model and, in an early example of audio sampling, traveled around California recording individual organ pipes, then converted the sounds into digital waveforms. North American and Autonetics wanted to apply their aerospace designs to other markets, but knew they needed to partner with an established manufacturer if they were to succeed in digital music.

A Pairing Between Different Worlds

Allen founder Jerome Markowitz was mechanically inclined from a young age. He designed and built an electric go-kart, several radios and a television set, all before graduating from high school. He turned his attention to designing and building an oscillator-based electronic organ in 1936 and founded the Allen Organ Co. the next year. With a belief in evolving his own technology, Markowitz designed his own products and obtained a patent for a stable oscillator in 1938. He also designed an all-transistor organ in 1958.

Electronic organs quickly became popular due to some advantages over pipe organs. The latter are expensive to maintain, and new instruments can cost hundreds of thousands of dollars. Pipe organs often have thousands of lead, tin and wood pipes which are often inaccessible for maintenance and require climate control to avoid decay.

Early electronic organs, by contrast, were proving to be small, inexpensive and simple to maintain. Many of these, including the well-known Hammond organ, had developed their own recognizable tone that was completely different from a pipe organ. Even so, Markowitz worked for decades to reproduce the tone of an acoustic pipe organ electronically.

This work sparked his interest in Deutsch’s project. Autonetics’ tone generation system offered Allen total control over each tone’s harmonic parameters and the ability to more faithfully reproduce acoustic sounds. By manipulating the phase of each acoustic sample’s harmonics, Autonetics could also reduce the memory required to store each wave shape. Markowitz recalled in his memoirs that the prospect of gaining total control over his wave shapes sold him on the proposal.

“It’s a wave shape storage system, or what would now be called a sample system,” says Ralph’s son, Leslie “Les” Deutsch, himself a noted mathematician and musician. “They took the sampled waves and rather than storing those recorded wave shapes in memory, they did some mathematical analysis on them first, switched the phases of the harmonics so they took up less bits in memory, and stored the resulting wave shapes, which sounded the same to the human ear [as the acoustic sounds].” The result was a system optimized to store a large variety of different tones of a higher quality than anything else on the market.

In May 1969 the two companies entered into a joint venture to produce what is regarded as the world’s first digital instruments. Allen provided expertise from the musical side and North American supplied the electronics know-how. All associated patents would belong to Allen.

The partnership was often rocky, and the wide differences between musical ideas and the limitations of early ICs produced friction. One big pain point was the instrument’s volume control.

Most multi-keyboard organs, whether pipe or electronic, have a “divided expression” system in which separate foot pedals control the volume for each keyboard. The digital organ contract specified this design as well. But early in the process Rockwell found that only a single volume pedal controlling the entire instrument was feasible, which dismayed Markowitz and his staff.

The project nearly broke down over the issue, but the parties negotiated adding an IBM-style punch card reader to each instrument. This approach enabled a performer to expand his instrument by buying hundreds of extra punch cards, each containing a new sound. The compromise added two more MOS chips to each tone generator board and required funding from Allen, in addition to the $1.5 million he already had committed.

The completed prototype’s tone generator board featured 22 MOS/LSI devices and 48,000 transistors, a sizeable capability for 1970. Believing that the public would not be receptive to a technical term like “digital,” Markowitz opted to use “computer” instead, and unveiled his Allen Computer Organ at a Rockwell press party in May 1971. It was named one of the 100 best new products by Industrial Research magazine, a first for a musical instrument.

Despite the Computer Organ’s good reviews and successful sales, the relationship between Allen and Rockwell broke down shortly after the instrument was introduced. Some of Rockwell’s boards suffered from quality issues. And Allen found that making changes to the electronics was not as simple as they’d thought, and resented being a slave to Rockwell, Les Deutsch says. In turn, Rockwell wanted Allen to sell more organs. Rockwell also was disappointed that the Computer Organ’s retail price started at $5,000 (equal to nearly $30,000 in 2016), and while it fulfilled Ralph Deutsch’s original vision for an instrument with far fewer components, it did not satisfy his goal to produce a more affordable organ.

The issues came to a head in 1973, when Allen sued Rockwell. The lawsuit was settled out of court in 1976, and Allen gained full rights to the digital organ patents.

In his 1989 memoirs, Jerome Markowitz wrote that the joint venture was a “classic synergism.” Neither company on its own could create the first commercially viable, digital musical instrument. However, by acting cooperatively they had a good chance of succeeding.

The success of the digital organ made Allen one of the top electronic organ manufacturers in the world, a position the company retains today. Almost 50 years later many original Computer Organs remain in use around the world. Perhaps more important, however, is the fact that millions of portable keyboards and other digital instruments now use digitally sampled sounds stored in read-only memory, a direct descendant of the technology pioneered by Rockwell and Allen.

By posting a comment you confirm that you have read and accept our Posting Rules and Terms of Use.
Advertisement
RELATED ARTICLES
Pipe Organs, Steam Engines and One Historic Valve Solution
Video: Donor organ delivered by drone in Maryland
DNA ‘Smart Glue’ May Help Build 3D Tissues, Organs
Restoring that Notre-Dame sound
Musical Table Teaches Basics of Computer Programming
Advertisement