One of the mysteries relevant to climate change involves how emissions from nature and human activities are changed in the atmosphere to become secondary organic aerosols (SOA).

Unseen by the naked eye, large quantities of carbon-containing vapors enter the atmosphere from trees, fossil fuel burning and forest fires. Through a complex interaction between sunlight and atmospheric oxidants, these vapors cook an atmospheric stew holding millions of new carbon-containing molecules. Some of these molecules then condense into SOAs that in turn change clouds, influence precipitation and affect the amount of solar energy reaching the Earth's surface. 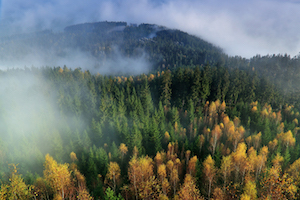 Pollution and particles blown from cities mix with natural emissions from trees and vegetation to form secondary organic aerosols. Image credit: Pixabay. Now, research led by the Pacific Northwest National Laboratory (PNNL) has discovered an often ignored but very influential process/parameter that can affect not only the air we breathe but the weather and climate. Oligomerization, or molecular bonding, is a process by which smaller molecules combine and form larger molecules, increasing the amount and lifetime of secondary organic aerosols in the atmosphere. These bondings may hold the key to more successful modeling of the particles. Most atmospheric models ignore oligomerization.

Scientists from PNNL and the University of California started with real-world measurements from the 2010 Carbonaceous Aerosols and Radiative Effects (CARES) field study. They also included recent laboratory measurements, especially about rapid oligomerization processes affecting the formation and evolution of SOAs from both natural and human-made sources. Based on these measurement sets, the team developed a new method to model aerosol particles, which they used in the Weather Research and Forecasting model coupled to chemistry.

When scientists included the oligomerization process in the model, natural vapors wafting from trees proved to be the largest instigator of SOAs in the study area, and model predictions were closer to surface measurements during the CARES 2010 field campaign. Model simulations that neglected this rapid oligomerization predicted much lower SOA particles compared to measurements and overemphasized the contribution of fossil fuel emissions in forming SOAs.

As process modeling improves, scientists will use comprehensive sensitivity analysis techniques, such as the one demonstrated in this study, to tease out the secrets and rank the most influential parameters affecting the amount of SOAs in the atmosphere. More effectively modeling these influential parameters will help improve the understanding of their impacts.

By posting a comment you confirm that you have read and accept our Posting Rules and Terms of Use.
Advertisement
RELATED ARTICLES
Physicists Design Model of Winter on Mars Based on Ice Particles
Aerosol Emissions Driven by Consumption
Volcano Masked Pace of Sea Level Rise
Aerosols Can Cool Climate, But Won't Solve Global Warming
A More Precise Analysis of the Organic Fraction of Smog
Advertisement