Round and Round We Go: Rotary Engines for Automotive Applications

Given that internal combustion (IC) engines used to power automobiles are intended to drive wheels, it might seem obvious that engines which produces rotary rather than reciprocating motion in the first place would be preferable. But the reality is that piston engines have long established an overwhelming predominance in the worldwide automotive industry.

According to Phil Gott, analyst with IHS Automotive, sound reasons for this exist in the U.S. He points out that though rotary engines are capable of high power densities and smooth operation, they have also generally proved much less fuel efficient and also more prone to generate high levels of hydrocarbon emissions than reciprocating counterparts.

But the rotary engine concept has never gone away. Moreover, and perhaps ironically, at a time when fuel efficiency and environmental friendliness are regarded as priorities there is renewed interest in rotary technology as a means of achieving those goals.

Asymmetry as an Advantage

“A petrol engine with the efficiency of a diesel counterpart” is the promise held out for a rotary engine being developed by Libralato based in Manchester in the UK. The words are those of Dan Aris, managing director, who says that though the idea for the engine originated with Italian engineer Dr. Ruggero Libralato just over 25 years ago, the first proof of concept tests took place as recently as 2011. As such, says Aris, it is still “fairly early days” for the engine, although testing has already taken place on a testbed at a UK university.

Aris says the engine has a number of a highly distinctive features. The thermodynamic cycle, for instance, is “completely new” and “all of the engine phases take place in parallel in each rotation of the engine.” What this means is that the engine “has a power phase in every rotation” and therefore “has twice the power density of a typical reciprocating engine.”

Aris says that a key enabling factor is that the engine has “asymmetrical expansion and compression volumes” which means the expansion volume is greater than the compression volume. As a result, more work can be extracted from the combustion of the fuel-air mixture meaning that the concept could be described, in his words, as a “rotary Atkinson Cycle engine.”

The most obvious physical difference between the Libralato engine and a conventional rotary engine is that it has two rotors each mounted on its own bearings. The rotors, Aris says, interact with each other so that they form and reform three chambers within the engine for intake, compression and expansion with every rotation. One is a “power rotor” that is connected to the output shaft and the other is a “following rotor.” This format, he says, constitutes a “completely new engine mechanism.” Nevertheless, it also promises to be quite robust because there are only four principal moving parts in the entire engine: the two rotors, a slider bar that connects them and an exhaust cylinder.

The engine is seen as being used in conjunction with an electric motor in plug-in hybrid vehicles, most likely in hybrids having a relatively small battery in which the IC motor is itself powerful enough to drive the vehicle. Aris says he is confident this sort of application has the potential to be a “game changer.” Cars equipped with the engine should therefore be capable of both electric operation in urban environments and conventional IC motor operation elsewhere. Aris adds that the engine would also be capable of simultaneously recharging the battery and could be used in conjunction with the electric motor, if need be. That should enable the fuel consumption of the “average car” to be reduced, he states, by two-thirds for a cost that could be repaid from fuel savings within two years. Indeed, projected fuel consumption for such a vehicle is around 100mpg.

Development of the engine has already been taken place as part of the UK’s Proving Factory initiative and initial manufacture of units for actual on-vehicle use should take place during 2015. Indeed plans exist for the engine to be used in a relevant demonstrator project as early as the first half of 2016. If all goes well, Aris says that higher volume production could then get underway in 2017. No agreements have yet been signed with vehicle makers, though he says that there has been interest in the concept from manufacturers in the U.S., India and China.

Meanwhile, another UK firm says it has a concept that could help move rotary engines much further into the mainstream is Advanced Innovative Engineering (AIE). As Managing Director Nathan Bailey says, the company was founded in 2012 specifically as an R&D and low-volume manufacturing operation for Wankel-type rotary engines. It has already come up with its first device which is now at physical prototype stage: the 225 CS engine, a 40hp unit primarily intended for use as a range extender for an electric motor in a hybrid vehicle.

The nomenclature, however, is not incidental. Though "C" stands fairly conventionally for compact, the ‘S’ is a shortform for "SPRACS" or "self-pressurized air rotor cooling system" and as such indicates a key attribute that Bailey says provides its most distinctive feature. 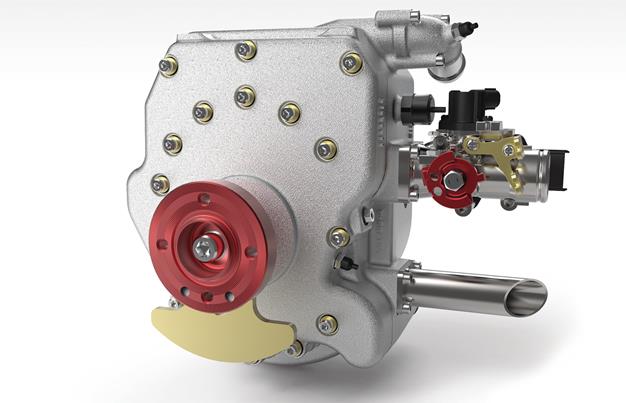 The 225 CS uses a self-pressurized air rotor cooling system. Source: AIE Cooling is an issue that has long impeded the applicability of rotary engines. Bailey ways that AIE believes it has a solution to that problem. He says that relevant cooling techniques have typically used either oil or air for cooling, the former most obviously in automotive applications and the latter in aircraft where the physical movement of the engine through the atmosphere makes it an obvious option.

Oil cooling is highly efficient but complex, air cooling is simple but "dirty" because it can cause lubricating fluids to be blown out of the engine. AIE’s innovation is to introduce an air cooling system that can be applied to a sealed engine so that there is no ejection of engine fluids into the atmosphere.

What happens in the engine, says Bailey, is that though most of the gas produced by the combustion process is exhausted to the atmosphere in a conventional manner, a residue that remains inside the engine becomes pressurized at 80-100psi and is circulated past the rotor to absorb thermal energy from it. Hence, despite the name, the methodology is actually one of gas cooling as no air is drawn into the engine for cooling purposes only. The gas is then passed through an integrated heat exchanger, which transfers the heat to the engine’s external liquid cooling system.

An essential enabling factor, Bailey says, is that even though the gas is produced by the combustion process “it is still cooler than the rotor.” The gas involved does not escape past the tip seal of the rotor, which would simply result in it entering the next chamber produced by the action of the rotor, but instead exits past the rotor’s side seal. That means it reaches the center of the engine, where it becomes available as a cooling agent.

Bailey adds that the technique is further facilitated by the fact that in a rotary engine “intake and combustion take place in different places," which means the engine has a hot side and a cold side. The initial heat exchange process, therefore, is located in the "cold" region to help increase the efficiency of its operation in extracting heat from the waste combustion gas before it transfers it to the external cooling system. A further benefit of this configuration, he says, is that it helps even out the temperature differential between the two regions of the engine. This may be a useful attribute if the engine is constructed from aluminium, a material with the attraction of being lightweight but the susceptibility to thermal distortion.

The AIE design offers a number of advantages compared with conventional oil-cooled Wankel-type rotary engines. It is, he states lighter and simpler and "minimizes oil loss and offers both potentially longer engine life and higher power.”

As such, Bailey envisages the AIE engine as having the greatest potential in automotive applications working in conjunction with an electric motor in hybrid vehicles rather than as a primary power source. “It just doesn’t make sense,” he says, for vehicles to carry the weight of a piston engine that is only likely to be used as a range extender for an electric motor.

Nevertheless Bailey concedes that work remains to be done to develop the engine to the point where it would be a genuinely commercial proposition. Emissions at present are too high for automotive use, but he says that AIE is working on the development of an "expander unit" that would allow the combustion process to continue after the gases have left the engine itself to reduce their hydrocarbon content. Bailey says the company is working to achieve test applications in both a motorcycle and an unmanned aerial vehicle.

Although rotary engines have failed to become mass market automotive power sources, recent developments may change those fortunes. At a minimum, young companies are working in the belief that they have the means to make that change happen.

By posting a comment you confirm that you have read and accept our Posting Rules and Terms of Use.
Advertisement
RELATED ARTICLES
Rotary Engines Reimagined
Old Tech, New Think: The LiquidPiston Rotary Engine
Engineering an Innovative Diesel Outboard Engine
Mazda plans a rotary engine-powered hybrid
Auto to Use Auxiliary Thermal Coolant Pump
Advertisement