Research has shown that the use of calcium silicate cement in place of ordinary Portland cement (OPC) could help lower both greenhouse gas emissions and water consumption—and better resist some of the most common de-icing salts that can reduce the lifespan of roads. 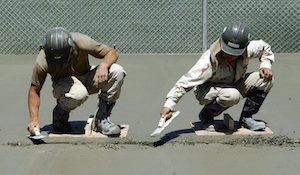 Calcium silicate cement gains strength through carbonation rather than use of water. Image credit: Pixabay.Engineers from Oregon State University (OSU), Purdue University and Solidia Technologies investigated the performance of the two cements when exposed to freezing or deicing salts: the first an ordinary Portland cement (OPC) that reacts through hydration, and the second, a calcium silicate cement that reacts and gains strength through carbonation.

Two techniques were used to evaluate the performance of the materials: the first measuring the potential reactivity between the concrete paste and the deicing salt (NaCl and MgCl2) using a low-temperature-differential scanning calorimeter, and the second using a longitudinal guarded comparative calorimeter equipped with acoustic emission to assess the freeze-thaw performance of mortar samples saturated with water or deicing solutions.

No chemical reaction was observed between carbonated calcium silicate cement (CCSC) paste and NaCl, while a damaging reaction was observed between the OPC paste and NaCl due to the presence of calcium sulfoaluminate phases. Both the OPC and CCSC mortars showed similar freeze-thaw performance when the system was water saturated. But when the water in the pores of the mortar was replaced with the deicing salt, the CCSC mortar showed less freeze-thaw damage (due mainly to possessing a different pore structure) and more resistance to salt degradation (due mainly to possessing a different chemistry) than the OPC mortar.

“This new product at first blush looks like conventional concrete, but it has properties that should make it last longer in some applications,” says Jason Weiss, chair in the OSU College of Engineering. “In addition, use of it could reduce carbon dioxide emissions, which is an important goal of the cement industry.”

Crude cement was used by the Egyptians to build the pyramids, improved upon during the time of the Roman Empire and reached its modern form around 180 years ago. When used to make concrete—a combination of cement, sand and crushed rock—it is one of the most proven building materials in human history.

However, therein lies part of the problem: concrete works so well, for so many uses, that 2-4 tons per year is produced for every person on Earth. Production of cement for use in concrete is believed to be responsible for 5-8% of the global emissions of carbon dioxide—largely because so much concrete is used.

“By using a type of cement that requires carbon dioxide to make, and in turn greatly extends the lifespan of some roads, the environmental benefits could be enormous,” Weiss says.

By posting a comment you confirm that you have read and accept our Posting Rules and Terms of Use.
Advertisement
RELATED ARTICLES
What You Need to Know About the Quality of Cement
Researcher Tests Fly Ash for Stronger Concrete
Cement Scrutinized at the Atomic Level
Using Vegetables to Fortify Building Materials
Furnace Waste Prevents Salt Deterioration of Roads
Advertisement