University of Wisconsin–Madison engineers are working to increase the effective size of antennas by turning the military vehicles that carry them into transmitters—using the structures that support the antennas themselves to help broadcast signals.

Troops in remote locations need to communicate by radio and move quickly, unencumbered by heavy and unwieldy equipment. However, antennas need to be at least one-quarter the length of the radio waves they transmit in order to operate efficiently.

High-frequency military signals use radio waves ranging from roughly a football field in length down to 10 yards. Even at the small end, the ideal size for an antenna is taller than an average adult.

“Unsurprisingly, we don’t use antennas that are that big,” says Nader Behdad, associate professor in electrical and computer engineering. “Putting a big, long antenna on top of an amphibious assault vehicle would be too high profile.”

Short antennas lighten loads at steep costs to performance. The devices are inefficient, dissipating as much as 90% of input power as heat instead of useful broadcast radio signals.

Increasing the size of an antenna without adding to its physical dimensions sounds impossible. However, real-world military antennas are almost always attached to other things—for example, large, metallic objects like trucks and armored transport or amphibious assault vehicles—and Behdad realized that these structures themselves could broadcast radio signals. 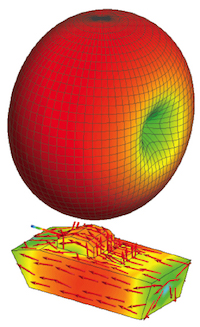 Engineers used computers to simulate amphibious assault vehicles acting as antennas. Image credit: Nader Behdad.“We are proposing to use the platform itself as the antenna,” says Behdad. “It’s a clever way to go around the limitations set by the laws of physics. From a practical point of view, the volume of the object on the military platform is the same, but we’ve effectively achieved a larger antenna.”

Turning trucks into transmitters not only makes antennas more efficient, but also enhances communication in the field by enabling one device to send and receive multiple types of information.

Separate transmitters handle internet data, Bluetooth connections and cellphone calls because each signal uses a particular bandwidth. As a result, military vehicles sprout metal forests of ungainly antennas high overhead. Some scientists have speculated that a yet-undiscovered material with unusual properties could pave the way to ultra-wideband antennas that could handle several broadcast types simultaneously, but those predictions remain unsubstantiated.

By posting a comment you confirm that you have read and accept our Posting Rules and Terms of Use.
Re: Turning Military Vehicles into Radio Transmitters
#1

For HF transmissions the vehicle is the transmitter rather than the antenna anyway.

It's different like military vehicles turning into a radio transmitter. Its help to track the peoples from anywhere they are like everyone know. In 123movies unblocked I saw military equipment which they are using for action against enemies that were amazing and nice for watching.