Ford will offer ballistic panels on its Police Interceptor sedan and utility that provide protection from armor-piercing rifle ammunition. The factory-equipped vehicles are the first pursuit-rated police cars in the United States to offer ballistic protection up to the Department of Justice’s (DOJ's) National Institute of Justice Type IV standard.

"The ballistic panel itself is made up of two basic layers," says Randy Freiburger, Ford's police special vehicle engineer. "The strike face, the outward-facing side, is a ballistic-grade ceramic tile that breaks up the bullet upon impact. On the back side of that tile is an aramid fiber that catches the shrapnel, preventing it from coming through." 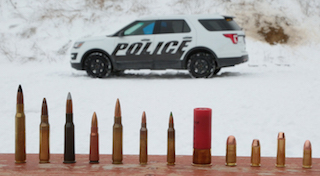 The Type IV panels are an additional option above and beyond existing ballistic panel protection offered by Ford. Optional Type III ballistic panels are already on duty in agencies around the U.S. and are rated to protect against all handgun and non-armor-piercing bullets up to .30 caliber (specifically, up to 7.62mm x 51mm NATO M80 ball ammunition) as well as special-threat rounds identified by the Los Angeles Police Department.